In a jaw-dropping DaliyKos/Research 2000 poll released today, a stunning 58% of Republicans did not believe (28%) or were unsure (30%) that President Barack Obama was in fact born in the United States. To be sure, this is a Southern pathology, a region home to 69% of all birthers and the only part of the country to increase its Republican presidential vote in 2008.
But this disturbing denial of the indisputable truth of Obama's U.S. citizenship is far from the only sign of social trouble in red state America. After all, as I first detailed two years ago, whether the issue is health care, education, working conditions, or virtually any indicator of social pathology, things are worst in precisely those states that voted for George W. Bush in 2004.
That the birther movement would take hold in the states of the old Confederacy should come as little surprise. While Americans rejected George W. Bush's Republican Party on Election Day in November, in counties across the South voters actually increased their support for the GOP candidate John McCain over Bush four years earlier. This interactive New York Times map tells the tale: 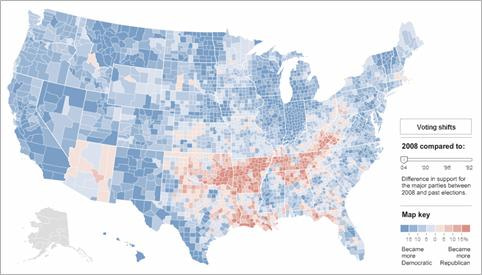 That helps explains why when it comes to the delusion over Obama's citizenship, as Steve Benen observed, one of these things is not like the other: 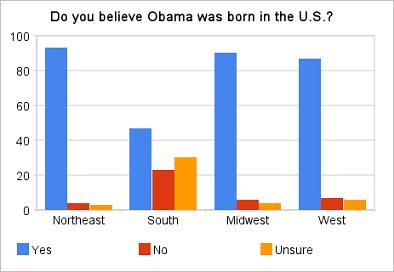 "Outside the South, this madness is gaining very little traction, and remains a fringe conspiracy theory," Benen concluded, lamenting, "Within the South, it's practically mainstream."
But that brand of racial flat-earthism is not all that's practically mainstream in the South.
Consider, for example, dismal health care. A 2007 Commonwealth Fund report, "Aiming Higher: Results from a State Scorecard on Health System Performance," examined states' performance across 32 indicators of health care access, quality, outcomes and hospital use. Topping the list were Hawaii, Iowa, New Hampshire, Vermont and Maine. Bringing up the rear were the Bush bastions of Kentucky, Louisiana, Nevada, Arkansas, Texas, with Mississippi and Oklahoma. The 10 worst performing states were all solidly Republican in 2004. (8 voted for McCain in 2008.)

The extremes in health care performance are startling. For example, 30% of adults and 20% of children in Texas lacked health insurance, compared to 11% in Minnesota and 5% in Vermont, respectively. Premature death rates from preventable conditions were almost double (141.7 per 100,000 people) in Tennessee, Arkansas, Louisiana and Mississippi compared to the top performing states (74.1 per 100,000). Adults over 50 receiving preventative care topped 50% in Minnesota compared to only 33% in Idaho. Childhood immunizations reached 94% in Massachusetts, compared to just 75% in the bottom five states. As the report details, federal and state policies, such as insurance requirements and Medicaid incentives, clearly impact health care outcomes.
(In May, the Washington Post rightly noted it would be blue state residents funding health care reform for their red state brethren in an article titled, "A Red State Booster Shot." And yet a 2008 survey predictably showed 68% of Republicans believe the U.S. has the best health system in the world, compared to only three in 10 Democrats.)
Then there's working conditions. A December 2005 study by the Political Economy Research Institute at the University of Massachusetts showed that Americans' working conditions generally follow the 2004 electoral map. The report's Work Environment Index (WEI) rated the quality of Americans' working lives by a weighting of three factors: job opportunities, job quality, and job fairness. The top five states were Delaware, New Hampshire, Minnesota, Vermont and Iowa, the bottom five were South Carolina, Utah, Arkansas Texas and Louisiana. Unsurprisingly, all five of the cellar-dwellers are so-called "Right-to-Work" states featuring outright hostility towards union organizing. (Click the following links for maps of WEI by state and right-to-work states.)

(It is worth noting that since the Work Environment Index was published, the new federal minimum wage was boosted to $7.25 an hour, well above the $5.15 level previously in place in most Southern states at the time. It is also worth noting that since the recession began in December 2007, decidedly blue states like Michigan, Rhode Island, Oregon and California have been among those hit hardest by unemployment.)
When it comes to education, faithfully Republican red states do a little (but not much) better. In 2007, the U.S. Chamber of Commerce released a study titled "Leaders and Laggards: A State-by-State Report Card on Educational Effectiveness." The report looked at seven different performance categories, including return on education investment, workforce readiness, teacher skills, and academic achievement of low-income and minority students. Again, the top five states (Massachusetts, Minnesota, New Hampshire, Vermont and New Jersey) backed Democrat Obama in 2008. Only two of the bottom 15 states similarly supported John Kerry; five voted for Obama four years later.
The same dismal pattern applies to a wide array of measures of social dysfunction and pathology. In 2007, 7 of the top 10 states with the highest murder rates were squarely in Red America; conversely, 7 of the 10 states with the lowest murder rates were in the Obama column. (Interestingly, six of those states have no death penalty statute.) The 10 states with the highest divorce rates in 2002 went for Bush two years later. (More recent data suggests an improvement in the Bible Belt.) In January 2009, a new report from the CDC showed teen birth rates increased for the first time in 15 years. Topping the list was Mississippi; again, 8 of the other 9 states in the top 10 went Republican in 2008. By almost any measure of societal breakdown that so-called Republican "values voters" decry, it is Red State America where moral failure is greatest.
Perhaps greatest among those moral failures is the simple unwillingness to accept the empirical truth. (This is not merely a case of Colbert's Law, in which "reality has a well-known liberal bias.") Like it or not, Barack Hussein Obama was born in Hawaii and was legitimately elected President of the United States. And that makes the paranoia and not so thinly veiled racism of red state partisans, aided and abetted by their feckless Republican representatives, not just wrong.
It's pathological.
Note: None of the above is to equate correlation with causation, or to ignore the central roles of economic development, demography and history in impacting the social indicators described here. While a state with an overall political preference may exhibit high rates of a given social dysfunction, that does not mean the supporters of that political viewpoint endorse or engage in the behavior in question. That said, when it comes to living standards, culture, politics and public policy matter.