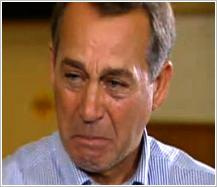 On Sunday, incoming House Speaker John Boehner had his prime time debut on CBS 60 Minutes. Proclaiming "I reject the word" compromise, Boehner made clear that past performance would be a guarantee of future results. But even more pathetic was his staggering hypocrisy. After all, Boehner claimed that President Obama, a man he accused of being a "socialist" and a "chicken s**t," had "disrespected" him.
Disrespect, of course, is in the eye of the beholder. In this case, as Leslie Stahl learned, the beholder has an orange glow:

STAHL: He basically called you a hostage-taker.
BOEHNER: Excuse me, Mr. President. I thought the election was over. You know, you get a lot of that heated rhetoric during an election. But now it's time to govern...
STAHL: There have been moments of disrespect shown to President Obama.
BOEHNER: Well, there was some disrespect, I would suggest, that was shown to me yesterday by the president.

Stahl was exactly right. There have been moments of disrespect shown to President Obama. Many of them, it turns out, were provided by John Boehner.
In the fall of 2008, Boehner weighed in on candidate Barack Obama's voting record while a state legislator in Illinois. Obama's "present" votes, Boehner insisted, made the Democratic presidential candidate "a chicken s**t."

"Now, listen, I've voted 'present' two or three times in my entire 25-year political career, where there might have been a conflict of interest and I didn't feel like I should vote," Boehner said. "In Congress, we have a red button, a green button and a yellow button, alright. Green means 'yes,' red means 'no,' and yellow means you're a chicken s***.
"And the last thing we need in the White House, in the oval office, behind that big desk, is some chicken who wants to push this yellow button."

But if that "heated rhetoric" could be brushed off as campaign hyperbole, Boehner's dire warnings about President Obama's "socialist experiment" cannot. Even, as it turns out, by John Boehner.
In September 2009, Meet the Press host David Gregory grilled Boehner over GOP charges that President Obama's agenda was "socialist power grab." After first insisting that "Americans are genuinely scared to death," the Minority Leader falsely claimed he had never used such language:

GREGORY: Do you think the president's a socialist? Because that's what...
BOEHNER: No.
GREGORY: OK. But the head of the Republican Party is, is calling him that.
BOEHNER: Well, listen, I didn't call him that and I'm not going to call him that.

But on February 28, 2009 - just weeks after President Obama took the oath of office - Boehner warned:

"Well, the stimulus, the omnibus, the budget -- it's all one big down payment on a new American socialist experiment. ... All of these bills seek to replace our economic freedom with the whims and mandates of politicians and bureaucrats."

When John Boehner wasn't crying last night, he was touting his big plans for major spending cuts - all $25 million of them.
During the midterm campaign, a cowardly Boehner refused to specify what spending cuts he supported. "Let's not get to the potential solutions," he said, instead calling for an "adult conversation" on the budget. Sadly, that adult conversation didn't start last night:

STAHL: What's your first one [budget cutting measure] gonna be?
BOEHNER: Well, how about we start with cutting Congress? I'm going to cut my budget, my leadership budget five percent. I'm going to cut all the leadership budgets by five percent. I'm gonna cut every committee's budget by five percent. And every member is gonna see a five percent reduction in their allowance. All together that's $25-$30 million and it likely would be one of the first votes we cast.
STAHL: Okay, but you admit that's not very much money.
BOEHNER: You've got to start somewhere. And we're going to start there.

Of course, in April 2009, President Obama had already reached the same conclusion and instructed his Cabinet secretaries to immediately trim $100 million in administrative spending. In response, John Boehner, the same man who voted for the budget-busting Bush tax cuts and Medicare prescription drug program, mocked the President:

"The administration's new talk of trimming a meager .0025 percent from the $4 trillion federal budget just doesn't square with its reckless record on borrowing and spending," said House Minority Leader John Boehner. "Washington Democrats have spent the past three months doling out more taxpayer dollars than every previous president combined, and the administration is clearly feeling the heat."

At times, Boehner has been able to combine his myth-making and revisionist history into a single act of tearful demagoguery. In May 2007, Boehner lashed out at opponents of President Bush's $100 billion Iraq funding request by waving the bloody if unrelated shirt of 9/11:

"Members on both sides of the aisle feel differently about our mission in Iraq and our chances of success there," Boehner said, pausing to compose himself. As he continued, Boehner began to weep openly, crying out: "After 3,000 of our fellow citizens died at the hands of these terrorists, when are we going to stand up and take them on? When are we going to defeat them?"

That episode followed Boehner's disrespect for the entire Democratic Party during the debate over the Military Commissions Act:

"The Democrats' partisan opposition to this program, at the urging of the radical leftist element of their Party, provides further proof that they continue to put politics ahead of addressing the security concerns of the American people...it underscores why the American people don't trust Democrats when it comes to national and homeland security."

Of course, being accused of putting politics before national security is a tough charge. But coming as it does from John Boehner, such disrespect nothing to cry about.