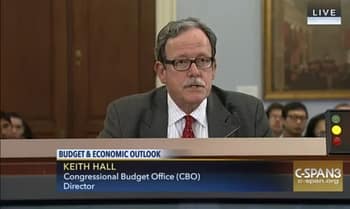 This past two weeks have been big ones for some very big promises from Republicans in Washington. It didn't go well for them.
Three weeks after House Republicans voted to pass a new version of their "American Health Care Act," the nonpartisan Congressional Budget Office (CBO) weighed in on high-profile pledges from President Donald Trump and House Speaker Paul Ryan. While Trump guaranteed "insurance for everybody" that is "much less expensive and much better," Ryan insisted the revised AHCA "protects people with pre-existing conditions." Not content to rest there, HHS Secretary Tom Price boasted that Trumpcare's $880 billion in cuts to Medicaid will "absolutely not" result in millions losing coverage.
Meanwhile, the Trump administration also unveiled its fiscal year 2018 budget proposal. With its draconian spending cuts to the social safety net programs, the White House blueprint was proclaimed "dead on arrival" even by some Republicans. But more embarrassing to Donald Trump was its double-counting of $2 trillion in revenue for Uncle Sam magically generated by "sustained, 3 percent economic growth." As Treasury Secretary Steven Mnuchin declared a month ago, "the plan will pay for itself with growth."
Unfortunately for the White House and GOP leaders on Capitol Hill, the CBO demolished all of those Republican myths. Again. That's because whether the issue is health care, taxes, job numbers, or the impact of the President Obama's 2009 economic stimulus, the acronym "CBO" doesn't just stand for "Congressional Budget Office." It's also shorthand for "Conservative Bulls**t Obliterator."
As it turns out, in recent years that's been true even when Republicans have their hand-picked choice running the agency.
Continue reading at Daily Kos,