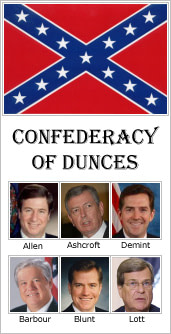 This weekend, the disgusting spectacle of the Confederate flag reared its ugly head once again, this time in Missouri. Republican Governor Matt Blunt ordered the flag to be flown for a day during a memorial service attended at the Confederate Memorial State Historic Site in Higginsville.
The 400 people in attendance didn't just lay roses and sing "Dixie." They raised the question as to whether the national Republican leadership is just whistling Dixie when it comes to celebrating the old South. The GOP leadership, from Trent Lott, John Ashcroft and Jim Demint to Haley Barbour, George Allen and President Bush himself, have refused to denounce the CSA flag for what it is, a symbol of racial hatred, treason and tragedy.
A quick history highlights the opportunism and racial politics of these born-again confederates. Let's start with Mississippi Senator Trent Lott, who lost his Senate Majority Leadership post for his praise of Dixiecrat and staunch segregationist Strom Thurmond. "I want to say this about my state: when Strom Thurmond ran for President, we voted for him." Lott boasted. "We're proud of it. And if the rest of the country had followed our lead, we wouldn't have had all these problems over all these years, either."
Lott has been very clear in myriad other ways that "the old times there are not forgotten." Lott was a speaker in 1992 at an event of the Council of Conservative Citizens, a successor to the White Citizens' Councils of Jim Crow days. Among its offerings in seething racial hatred is a "Wanted" poster of Abraham Lincoln. Lott's also offered his rebel yell in the virulently neo-Confederate Southern Partisan, where in 1984 he called the Civil War "the war of aggression."
Trent Lott is not the only Mississippi politician to support groups like the CCC and honor the Confederate flag. Former Republican National Committee Chairman and now Mississippi Governor Haley Barbour wore a lapel pin with the image during his campaign and attended a CCC barbeque in 2003.
Another neocon (that is, neo-Confederate) is former Attorney General John Ashcroft. Ashcroft granted a long interview to the Southern Partisan, in which he stated, "Your magazine helps set the record straight. You've got a heritage of doing that, of defending Southern patriots like [Robert E.] Lee, [Stonewall] Jackson and [Jefferson] Davis. Traditionalists must do more. I've got to do more. We've all got to stand up and speak in this respect or else we'll be taught that these people were giving their lives, subscribing their sacred fortunes and their honor to some perverted agenda."
Past presidential aspirant Ashcroft is joined by future 2008 GOP hopeful, Virginia Senator George Allen. Allen, who in 2005 co-sponsored a resolution apologizing for the Senate's past use of the filibuster against anti-lynching legislation in the 1920's, displayed a Confederate flag and a noose at his home. While governor of Virginia, Allen declared "Confederate Heritage Month" and branded the NAACP an extremist group."
Senate newcomer Jim Demint from South Carolina, epicenter of the Confederate flag controversy, is yet another supporter of the CSA flag. During his Senate primary campaign against Governor David Beasley, who was dogged by his opposition to the flag, Demint said of the South Carolina rebel flag, "it should stay right where it is and I don't think the state legislature or governor should spend any more time on it."
And what of President Bush? During the 2000 presidential primaries, he refused to call for the confederate flag to be taken down in South Carolina. And in the aftermath of Trent Lott's downfall, Bush again refused to use the opportunity to call for an end to the flag.
It is long past time for the leaders of both political parties to speak out against the Confederate flag and the hagiography of the Confederacy and its henchmen. No one is opposed to the sons and daughters of the South honoring their ancestors. "We recognize citizens have a right to honor their ancestors and heroes," said Harold Crumpton, president of the St. Louis branch of the NAACP. "But they don't have the right to use state funds and property to pass on the venom of their symbols of hatred."
Mr. Crumpton is spot on. The Confederate flag is not a symbol of a proud, noble heritage, but of slavery, racial hatred, treason and secession. Over 600,000 Americans died in battle because of that banner. There can be no doubt that Confederate soldiers were courageous and even heroic. But their their cause was an abomination. To display and celebrate its symbols is an affront to all Americans, white and black.
Looking back at the surrender of Robert E. Lee at Appamattox Court House, Ulysses S. Grant himself said he was "depressed at the defeat of a foe who had fought so valiantly." He added, though, it was for "the worst cause for which anyone ever fought".
It is worth noting that Lee was overcome with gratitude by Grant's generous surrender terms. "General Grant, this will have the most happy effect upon my men."
It's long past time for the sons of the South to return the favor.