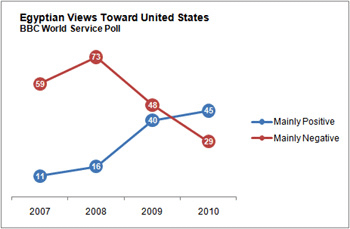 While the Obama administration is grappling to find the right path forward in Egypt, Republicans are deeply divided. Fearful of the Muslim Brotherhood and fearful for Israel, some like John Bolton and Rep. Thaddeus McCotter have urged support for the authoritarian "devil we know." Others, like Bill Kristol and Max Boot, called for the President to "help usher Mubarak out."
Regardless of their views, the members of the right-wing commentariat hold one belief in common: Whatever the way forward for Egypt's nascent democratic uprising, the new birth of freedom on the Nile is all thanks to George W. Bush.
There are many problems with this brand of conservative wishful thinking. Not least among them, as Nate Silver pointed out in the New York Times, is that the Egyptian people hated George W. Bush. Citing public opinion data collected annually since 2007, Silver reported the U.S. reemerged as a shining beacon only after Bush left the White House and Barack Obama entered it:

The election of President Obama created a major change in opinion, however. In 2009, positive opinions about the United States rose to 40 percent against 48 percent negative. And last year -- the first survey conducted after Mr. Obama's well-received June 2009 speech in Cairo -- positive opinions became the plurality, at 45 percent, against 29 percent negative views, figures comparable to those for survey participants in the United Kingdom and France. Although opinion about the United States has also improved in most other countries since Mr. Obama's election, according to the survey, in perhaps no case has the change been quite so dramatic.

Nevertheless, the same apologists who shouted "three cheers for the Bush doctrine" in 2005 and who became strangely silent after the victory of Hamas in Gaza a year later are back to proclaim Bush's triumph in Egypt.
(Not all were silent. Then Secretary of State Condoleezza Rice acknowledged in 2006, "I've asked why nobody saw it coming," adding, "It does say something about us not having a good enough pulse." And last June, Liz Cheney said the Palestinian elections were a mistake, telling ABC's Jake Tapper "I don't think they were ready for it. I don't think we should have pushed it.")
On Saturday, Iran-Contra figure and Bush national security adviser Elliot Abrams declared that the "Egypt protests show George W. Bush was right about freedom in the Arab world." In Tuesday's paper, torture enthusiast turned Washington Post columnist Marc Thiessen seconded that emotion:

Four years ago, President Bush spoke out for Ayman Nour and the Egyptian people. Now President Obama has his chance to do the same. Today, Egyptians believe America is against them. It is up to Obama to change that.

Writing in the National Review, Jay Nordlinger fondly recalled George W. Bush words delivered in Sharm El Sheikh in May 2008 that, "The truth is that freedom is a universal right -- the Almighty's gift to every man, woman, and child on the face of the earth." Nordlinger concluded:

There is no question about where George W. Bush stands. That American woman -- the type of American I know all too well -- might have said, repeatedly, "Democracy is overrated." But I don't think so. Bush doesn't think so. And the people in the streets of Cairo and other Egyptian cities don't think so.

As it turns out, the people in the streets of Cairo and other Egyptian cities didn't and still don't think much of George W. Bush. Perhaps it's not just due to the U.S. invasion of Iraq, the stain of Abu Ghraib or the detention facility at Guantanamo Bay. Despite his repeated proclamations that liberty is "God's gift to humanity," George W. Bush also routinely joked:

"If this were a dictatorship, it'd be a heck of a lot easier, just so long as I'm the dictator."

UPDATE 1: Writing in the Huffington Post, Max Blumenthal explains that the polling data on Egyptian attitudes toward the U.S. are far more complex than presented above. According to Blumenthal, the BBC survey cited by Nate Silver "sampled only urban areas of Egypt -- specifically Alexandria, Cairo, Giza and Shoubra al-Khaima -- that represent only 22 percent of the total national adult population." More important, the broader 2010 Global Attitudes survey from the Pew Research Center found that 82% of Egyptians view the U.S. negatively. The brief positive bump which follow the inauguration of President Obama (from 22% in 2008 to 27% in 2009) essentially evaporated by last year.
UPDATE 2: Nate Silver responds to Blumenthal's analysis and suggests more background information is needed from both pollsters (each of which he praised). While examining factors which could impact the accuracy of one or both surveys, he concludes:

It does seem slightly more plausible to me that, as the BBC survey shows, Egyptian opinion of the United States would have moved upward rather than downward between early 2009 and early 2010, given that Barack Obama gave a very well-received speech there in the intervening months. At the same time, it worries me a bit -- now having seen the Pew study as a point of comparison, which has been less volatile -- that the BBC poll's numbers have shifted so significantly over the course of the past four years. We will endeavor to contact both organizations and see if we can learn a bit more.

One comment on “Egyptians' Approval of U.S. Tripled After Obama Became President”