As President Obama continues to press his plan to slice $800 billion off the national debt by ending tax cuts for the top two percent of earners, the New York Times on Sunday profiled upper-income Americans trying to skirt the modestly higher bill. But the Times didn't merely fail to note the economic boom they along with most Americans enjoyed the last time the top marginal income tax rate hit 39.6 percent and the capital gains tax rate was at 20 percent. As David Weigel noted, to highlight the plight of the tragically well-off, the Times turned to "the rich people who don't know how tax rates work."
If this gambit sounds familiar, it should. Because just weeks after Barack Obama took the oath of office in 2009, ABC News similarly--and wrongly--warned of IRS horror stories for the affluent. 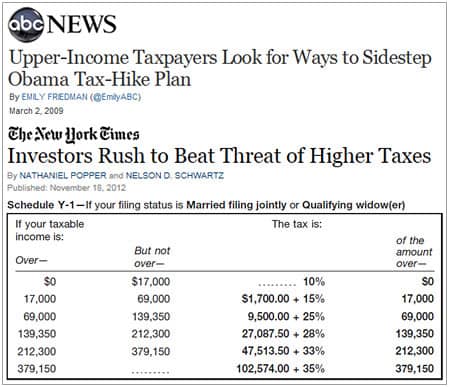 President Barack Obama's tax proposal - which promises to increase taxes for those families with incomes of $250,000 or more -- has some Americans brainstorming ways to decrease their pay, even if it's just by a dollar.
A 63-year-old attorney based in Lafayette, La., who asked not to be named, told ABCNews.com that she plans to cut back on her business to get her annual income under the quarter million mark should the Obama tax plan be passed by Congress and become law...
"We are going to try to figure out how to make our income $249,999.00," she said.
"We have to find a way out where we can make just what we need to just under the line so we can benefit from Obama's tax plan," she added. "Why kill yourself working if you're going to give it all away to people who aren't working as hard?"

But the fear-mongering by those apparently unfamiliar with how marginal tax rates operate didn't end there:

Dr. Sharon Poczatek, who runs her own dental practice in Boulder, Colo., said that she too is trying to figure out ways to get out of paying the taxes proposed in Obama's plan.
"I've put thought into how to get under $250,000," said Poczatek. "It would mean working fewer days which means having fewer employees, seeing fewer patients and taking time off."
"Generally it means being less productive," she said.
"The motivation for a lot of people like me - dentists, entrepreneurs, lawyers - is that the more you work the more money you make," said Poczatek. "But if I'm going to be working just to give it back to the government -- it's de-motivating and demoralizing."

As it turns out, Friedman didn't merely fail to explain how marginal tax rates actually work (see IRS table above). She ignored that Obama not only ran on returning upper-income tax rates to their boom-time Clinton levels, but won voters earning over $200,000 a year by 52 to 46 percent. Instead, she included this ominous prediction from Peter Morici of the Robert H. Smith School of Business at the University of Maryland:

Morici says that he believes Obama's tax proposal could spark a kind of class war. "What Obama is doing is pitting the poor against the upper middle class," said Morici. "He'll tax the rich for the health benefits everyone else wants."

What followed the publication of Friedman's piece was a firestorm of criticism so overwhelming that ABC News apologized to readers and offered a completely rewritten piece the next day:

Editor's Note: Yesterday ABC News published a version of this story which some readers felt did not provide a comprehensive enough analysis of Obama's tax code for those families making $250k or more. ABCNews.com has heard those concerns and after review has decided to post an updated version of the story.

And in that new version, financial adviser Gary Schatsky explained, "Just going over $250,000 doesn't mean it impacts your tax liability for every dollar before that. It impacts you at the margin."

Marginal or graduated tax systems like the one in the U.S. means only the money earned over a certain amount -- $250,000 in the case of Obama's proposal -- will be taxed at an increased percentage.
For instance, for a person earning $350,000, the first $250,000 of income would be taxed at lower tax rates, while the last $100,000 would be taxed at Obama's higher rate.
"Only the incremental earnings above [a quarter of a million dollars] are taxed at a higher rate," said Schatsky.
"[T]o focus keeping your income below a quarter million dollars is not going to have any spectacular magic for individual tax payers," said Schatsky. "The difference between $249,999 and $251,000 will probably have zero tax impact."

Fast forwarding to this week, the New York Times has made a milder form of the same mistake. In its November 18 article describing investors trying to push capital gains into 2012 to avoid potentially a higher rate next year (20, not 15 percent), Nathaniel Popper and Nelson Schwarz introduced readers to a new potential victim:

Kristina Collins, a chiropractor in McLean, Va., said she and her husband planned to closely monitor the business income from their joint practice to avoid crossing the income threshold for higher taxes outlined by President Obama on earnings above $200,000 for individuals and $250,000 for couples.
Ms. Collins said she felt torn by being near the cutoff line and disappointed that federal tax policy was providing a disincentive to keep expanding a business she founded in 1998.
"If we're really close and it's near the end-year, maybe we'll just close down for a while and go on vacation," she said.

In "Investors Rush to Beat Threat of Higher Taxes," the Times did not correct Collins' misunderstanding. Nor did the paper note the research which has concluded while that lower capital gains rates don't increase investment, they do fuel increasing income inequality.
Mercifully, on Tuesday the New York Times ("Tax Talks Raise Bar for Richest Americans") performed a modest act of journalistic penance in telling the story of Anne Zimmerman, a small-business owner in Cincinnati. Zimmerman, whose two businesses had a combined annual profit of $250,000 to $500,000 in recent years, said the proposed tax changes seemed reasonable.

If all Mr. Obama's tax proposals for wealthy Americans were enacted, they would raise $1.6 trillion over the next decade. And an analysis by the Tax Policy Center, a nonpartisan research firm, found that the increases would be heavily weighted toward the wealthiest. Taxpayers with adjusted gross incomes over $1 million would see average increases of $184,504, the study found, with higher taxes on the ultrawealthy bloating that average. Those with adjusted gross incomes from $200,000 to $500,000 would face a tax increase averaging $4,446, with people toward the lower end having only a modest increase and people on the higher end paying several times more.
A married couple with two children earning $300,000 would see its effective tax rate increase to 21.1 percent from 16.5 percent, according to an analysis by the Tax Policy Center. A married couple with two children earning $2 million would see its effective federal income tax rate rise to 26.8 percent from 21.6 percent.
To Ms. Zimmerman, the Cincinnati businesswoman, that amount sounds reasonable.
"I'm not going to change my business decision-making process based on a few percentage points of tax increases," she said. "If it helps get the country on a better path, well, we're all in this together."

Especially, it turns out, when the press accurately explains how our tax system actually works.

One comment on “Four Years Later, Media Still Getting It Wrong on Tax Rates”