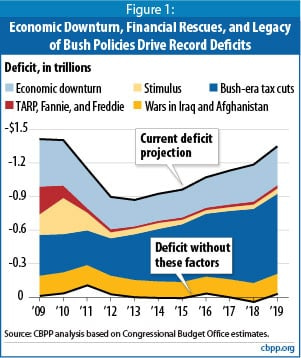 "My goal is to cut government in half in twenty-five years," Reagan Revolutionary Grover Norquist boasted, "to get it down to the size where we can drown it in the bathtub." Now, a generation after Norquist launched his crusade, Republican White House hopefuls Newt Gingrich and Tim Pawlenty are leading a new charge to "starve the beast." Even as these Republicans call for new Treasury-draining tax cuts, they are resurrecting a bad idea whose time never came: a balanced budget amendment to the United States Constitution.
While conveniently ignoring the supply-side snake oil which tripled the national debt under Ronald Reagan and doubled it again under George W. Bush, former House Speaker Newt Gingrich warned that "Washington's total disregard for fiscal discipline has jeopardized America's moral, political and economic authority within the world community." His solution to save the "foundation of personal and economic liberty upon which our nation is built" is the balanced budget amendment:

Since members of Congress has given no indication that they intend to alter their behavior, reject unbridled spending and return to the traditions of fiscal restraint, we believe that there is little likelihood that they will propose an amendment. As a result, the American people must act. Let us begin by calling upon every member of Congress and every candidate seeking office to commit to voting for a Federal Balanced Budget Amendment immediately. By raising a united voice in every district in every state in America, we can build the political will for Congress to act.

If Gingrich's litmus test for candidates sounds familiar, it should.
In 1992 and again in 1995, Republicans in the House and Senate narrowly failed in their first effort to drown government in a bathtub through a balanced budget amendment. Clinton Treasury Secretary Robert Rubin, no wild-eyed liberal by any stretch of the imagination, warned Congress that the GOP gambit would be ''a terrible mistake'' that would pose ''unacceptable economic risks to the nation.'' As the New York Times recalled in 1997:

In his testimony on Friday, Mr. Rubin said he would stress that if the amendment was in force, an economic downturn could quickly ''turn into a recession, and a recession into something worse.''
''The problem is that if the nation does in fact get into a recession,'' he said, ''we now have automatic stabilizers that go into effect that can increase demand in the government sector to offset declines in the private sector. What the balanced budget amendment would require is that during a recession we would have to raise taxes or cut spending to put ourselves back in balance. And that could exacerbate the recession.''

Of course, not a single Republican voted for Clinton's 1993 deficit reduction package, which along with a booming economy helped produce balanced budgets and a CBO-projected $5.6 trillion surplus by 2001. Nevertheless, Newt Gingrich like other of his GOP colleagues gave the Republican Congress credit for it:

Despite not passing the constitutional amendment in 1995, the Congress passed balanced budgets for four years, paid off $405 billion in debt and had the lowest spending growth - 2.9% - since President Calvin Coolidge.

As it turns out, Newt Gingrich is far from alone in Republican circles in advocating the balanced budget amendment. In Minnesota Governor Tim Pawlenty, Gingrich has company even among the fraternity of Republican presidential wannabes.
In recent weeks Governor Pawlenty exhumed the stinking corpse of the balanced budget amendment to fight the deficit. For example, in a February 1, 2010 Politico op-ed ("Ponzi Scheme on the Potomac"), Pawlenty tried to reanimated the dead:

That's why we need an amendment to the U.S. Constitution to require a balanced budget with limited exceptions for war, natural disasters and other emergencies. Every state but one has a balanced budget requirement, and while such requirements make for difficult decisions, they work.

(Of course, those decisions are a lot less difficult when the federal government subsidizes state budgets like the one in stimulus critic Pawlenty's Minnesota. Facing a $1.2 billion budget deficit, Pawlenty has proposed slashing health care coverage, education funding and aid to municipalities. Still, to fully close the gap, Pawlenty's proposal relies on $387 million in stimulus funds from Washington.)
Without ever detailing how he would cut spending, Pawlenty made clear that new revenue from tax increases of any sort was off the table in his budget balancing calculus. Instead, he wrote:

"Lawmakers should support policies that promote economic growth. For example, the Bush tax cuts should be made permanent and tax burdens on individuals and businesses should be further reduced."

And as he outlined to Fox News' Stuart Varney in July, Newt Gingrich would go much further in slashing taxes of almost every stripe. Not only would he also make the Bush tax cuts permanent, Gingrich declared:

Among Congressional Republicans, including supposed deficit hawks like John McCain, John Boehner and Judd Gregg, the appetite for tax cuts is insatiable. For his part, McCain voted against the deficit commission legislation once sponsored, declaring:

"I want a spending commission, and I worry that this commission could have gotten together and agreed to increase taxes. Spending cuts are what we need. We don't need to raise taxes."

Of course, the Republicans' fuzzy math would lead to a fiscal calamity, necessarily gutting government spending including popular programs they claim to support. While Tim Pawlenty insisted, "I don't think anybody's gonna go back now and say, 'Let's abolish, or reduce, Medicare and Medicaid,'" a quick look at the numbers raises the question:

Just where would Republicans make their constitutionally-mandated cuts?

President Obama's proposed $3.8 trillion budget for 2011 is forecast to produce a $1.3 trillion deficit (down from $1.6 trillion in 2010). National defense and Social Security each come in at $738 billion. Medicare totals $498 billion, while Medicaid and other health care services add $260 billion and $25 billion, respectively. Throw in the required $251 billion in required interest payments on the national debt, and those portions alone of Washington's bill total over $2.5 trillion. Meanwhile, given that the Bush tax cuts accounted for half of the deficits during his tenure and more than half over the next decade, the Obama budget rightly calls for letting the Bush tax cuts expire for Americans earning over $250,000. (Click the chart below to use the New York Times interactive graphic.)

As he detailed in "The Bankruptcy Boys" and "Starve the Beast," Paul Krugman's question to the likes of Gingrich, Pawlenty and other Republican born-again deficit hawks is, "OK, the beast is starving. Now what?"

At this point, then, Republicans insist that the deficit must be eliminated but they're not willing either to raise taxes or to support cuts in any major government programs. And they're not willing to participate in serious bipartisan discussions, either, because that might force them to explain their plan -- and there isn't any plan, except to regain power.
But there is a kind of logic to the current Republican position: In effect, the party is doubling down on starve-the-beast. Depriving the government of revenue, it turns out, wasn't enough to push politicians into dismantling the welfare state. So now the de facto strategy is to oppose any responsible action until we are in the midst of a fiscal catastrophe. You read it here first.

And here second.
UPDATE: As Salon notes, grassroots conservatives are suffering from cognitive dissonance on spending cuts as well. Aside from foreign aid and welfare, which may up a tiny fraction of the federal budget, there is no area of spending which even 25% of conservatives polled want to see decreased or eliminated.