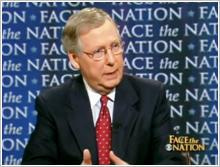 As the debate over health care reform heats up, Republicans in Congress are predictably regurgitating the talking points penned by GOP spinmeister Frank Luntz to once again block progress. Perhaps none of the GOP fearmongers has been more prolific than Senate Minority Leader Mitch McConnell. Time and again, McConnell has warned that President Obama's proposal "denies, delays, or rations health care." Of course, health care that is denied, delayed and rationed is exactly the crisis Americans face today.
McConnell was the natural choice to deliver the Saturday Republican radio address on the subject, given his frequent and faithful reproduction of Luntz's advice to appear "passionately on the side of reform" while actively working to undermine it with such canards as. "it could lead to the government rationing care, making people stand in line and denying treatment like they do in other countries with national healthcare." For example:

"Americans don't want their health care denied or delayed. But once government health care is the only option, bureaucratic hassles, endless hours stuck on hold waiting for a government service rep, restrictions on care, and rationing are sure to follow." (June 3, 2009)
"All of us want reform, but not reform that denies, delays, or rations health care." (June 10, 2009)
"Americans want to see changes in the health care system. But they don't want changes that deny, delay, or ration care." (June 11, 2009)

To be sure, de facto rationing what prevails in the U.S. health care system today. In 2007, a new Census Bureau formula calculated that an estimated 45.7 million Americans were without health insurance. In February, the Center for American Progress found that the recession added four million more to the rolls of the uninsured, a group which a study by Families USA in March found included 86.7 million Americans over a two-year span. And in June 2007, a devastating assessment from the Commonwealth Fund showed fully 25 million more Americans were "underinsured," a staggering 60 percent jump since 2003. All in all, 42% of the people in the United States under age 65 have insufficient insurance - or simply none at all.
Certain to make matters worse is the rapid deterioration of the employer-provided health insurance coverage. A 2007 report from the Economic Policy Institute showed a dramatic decline in employer-provided health care. That drop-off from 64.2% of Americans covered through workplace insurance in 2000 to just 59.7% in 2007 alone added 2.3 million more people to those without coverage.
(Ironically, the alarming lack of workplace coverage and the overall dismal performance of the health care system are worst precisely in those red states represented by McConnell's Republican brethren. In May, the Washington Post rightly noted it would be blue state residents funding health care in an article titled, "A Red State Booster Shot." And yet a 2008 survey predictably showed 68% of Republicans believe the U.S. has the best health system in the world, compared to only three in 10 Democrats.)
Of course, McConnell's dystopian future of health care delayed is already Americans' nightmare present. A Thompson Reuters survey released in April found that 1 in 5 Americans "have delayed or postponed medical care, mostly doctor visits, and many said cost was the main reason," a staggering jump from 15.9% in 2006. As study leader Gary Pickens summed up the grim findings:

"The results of this survey have serious implications for public health officials, hospital administrators, and healthcare consumers. We are seeing a positive correlation between Americans losing their access to employer-sponsored health insurance and deferral of healthcare."

As it turns out, these disturbing trends are having a cascading effect on waiting times and treatment at American emergency rooms. While high-profile cases of the deaths of untreated ER patients in Los Angeles and New York put a face on the crisis, a 2006 report by the Institute of Medicine revealed that U.S. emergency rooms can barely cope with the volume of patients in the best of circumstances:

The study cited three contributing problems to the rise in emergency room visits: the aging of the baby boomers, the growing number of uninsured and underinsured patients, and the lack of access to primary care physicians.
The report found that 114 million people, including 30 million children, visited emergency rooms in 2003, compared with 90 million visits a decade ago. In that same period, the number of U.S. hospitals decreased by 703, the number of emergency rooms decreased by 425, and the total number of hospital beds dropped by 198,000, mainly because of the trend toward cheaper outpatient care, according to the report.

So much for President Bush's July 2007 diagnosis that all was well with the U.S. health care system:

"I mean, people have access to health care in America. After all, you just go to an emergency room."

The rapidly increasing numbers of uninsured and their growing use of the emergency room as first and last resort add yet another burden to the mushrooming cost of health care for American families. That annual tab now tops $12,000. Of that, a recent analysis by the Center for American Progress found that "8 percent of families' 2009 health care premiums--approximately $1,100 a year--is due to our broken system that fails to cover the uninsured."
And with successful Republican obstruction of Democratic health care initiatives, those jaw-dropping costs would only continue their steep climb. A new report from the consulting firm PricewaterhouseCoopers forecast employers will face a 9% increase in health insurance costs in 2010. 42% of those business surveyed will pass at least some the new burden on to their workers. As PWC's Michael Thompson concluded:

"If the underlying costs go up by 9%, employees' costs actually go up by double digits," he said, noting that will have a "major, major impact" when many employers also are freezing or cutting pay.

It's no wonder, as a June 2009 study funded by the Robert Wood Johnson Foundation determined, medical bills are involved in over 60% of U.S. personal bankruptcies:

More than 75 percent of these bankrupt families had health insurance but still were overwhelmed by their medical debts, the team at Harvard Law School, Harvard Medical School and Ohio University reported in the American Journal of Medicine.
"Using a conservative definition, 62.1 percent of all bankruptcies in 2007 were medical; 92 percent of these medical debtors had medical debts over $5,000, or 10 percent of pretax family income," the researchers wrote. "Most medical debtors were well-educated, owned homes and had middle-class occupations."

In his demagoguery regarding President Obama's health insurance proposals featuring a "public option," Senator McConnell trotted out horror stories from Canada and the UK to illustrate "health care denied" by "government-run" systems. But as the New York Times suggested, McConnell's examples of Canadian Shona Holmes and Briton Bruce Hardy in essence made his opponents' case for them:

What Mr. McConnell did not disclose was that Ms. Holmes paid for her treatment, at the Mayo Clinic in Scottsdale, Arizona, on her own - an option that is available to patients with financial resources all over the world regardless of their nation's health insurance system...
As for the case of Mr. Hardy, the particulars seem to make it hard to tell how his situation differed from the countless Americans who battle their private insurers every day for access to the newest, most advanced and most expensive treatments.

In case there was any doubt on that point, hearings this week of the House Subcommittee on Oversight and Investigations should have ended it. Its investigation found that just three insurers (WellPoint Inc., UnitedHealth Group and Assurant Inc.) cancelled coverage for 20,000 people in what is deemed "rescission", praising employees in performance reviews for "for terminating the policies of customers with expensive illnesses." As the Los Angeles Times detailed, when lawmakers asked executives from the three firms if they would stop dropping customers except where they can show "intentional fraud," all said no:

Late in the hearing, [Bart] Stupak [D-MI], the committee chairman, put the executives on the spot. Stupak asked each of them whether he would at least commit his company to immediately stop rescissions except where they could show "intentional fraud."
The answer from all three executives:
"No."

Despite Mitch McConnell's grandstanding, Americans' health care is frequently denied - even when they are already paying for it.
And so it goes. Back in 1993, GOP propagandist William Kristol famously mobilized his Republican colleagues, warning that Bill Clinton' success with health reform could lead to a Democratic majority for a generation. His talking point then was "no crisis." 16 years later, Mitch McConnell is frightening Americans with dark visions of a future system where health care is denied, delayed and rationed.
The future is now.
UPDATE: A new CBS News/New York Times poll shows that "85 percent of respondents said the health care system needed to be fundamentally changed or completely rebuilt," while 72% of Americans support a so-called public option.