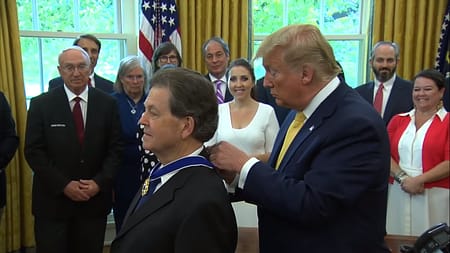 Imagine you're in a coffee shop when a man you don't know sits down uninvited next to you. Scribbling on a napkin and spouting something about "tax cuts pay for themselves," the man then confidently proclaims:

"You really can't collect much money from upper-income people. They know how to get around taxes."

You'd probably roll your eyes. You might suspect he was actually there to speak to the president of the local chapter of the College Republicans. You might even worry he was off his meds. Regardless, you would more than likely give him the cold shoulder.
Well, Donald Trump just gave him the Presidential Medal of Freedom, the nation's highest civilian honor. He is Arthur Laffer, the economist whose supply-snake oil has metastasized into the single-most damaging public policy prescription in the last four decades. And he is just the latest in a parade of conservative charlatans, felons, and failures to be so recognized by the last two GOP presidents of the United States.
Continue reading at Daily Kos.