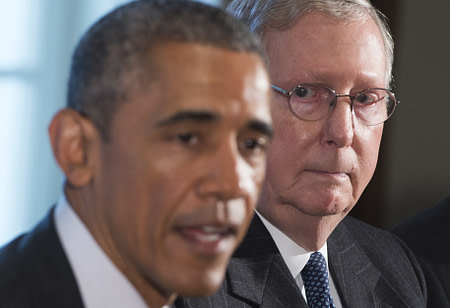 Many Congressional Republicans were shocked--SHOCKED!--this week at Donald Trump's humiliation in Helsinki. Like the rest of the world, they watched in real time as an American president kowtowed on foreign soil to a dangerous adversary of the United States. Siding with Russian President Vladimir Putin over the repeated conclusions of the unified American intelligence community and the bipartisan Senate Intelligence Committee, Trump once again rejected the idea of Moscow's ongoing interference in U.S. elections that began in 2016. "Make no mistake about it," Senate Majority Leader Mitch McConnell warned, "I would say to our friends in Europe, we understand the Russian threat and I think that is the widespread view here in the United States Senate among members of both parties."
But that's not all McConnell said after Trump shamed himself and his nation on the global stage:

"We may take up legislation related to this. In the meantime, I think the Russians need to know there's a lot of us who fully understand what happened in 2016, and it really better not happen again in 2018." [Emphasis added.]

Mitch McConnell should know. After all, he was one of the Gang of 8 Congressional leaders briefed by the Obama White House in August 2016 on the strategy and scope of the Kremlin's cyber-aggression designed to tilt the presidential election to the Republican Donald Trump. But McConnell chose partisan advantage over patriotism, warning Obama of hell to pay from the right if the president went public about the Russian attacks.
Of course, it was hardly the first time that right-wing rage--or even just the threat of it--led American policymakers and law enforcement officials to backtrack, change course, or just remain silent. After all, in 2016 former FBI Director James Comey went public with the Bureau's investigations of Hillary Clinton while withholding information about the growing Trump-Russia scandal, precisely because of the withering conservative hell storm he would face if did anything else. And as a quick glance back shows, from the fate of the Bush torture team and raising the debt ceiling to the battle over Obamacare and even the 2000 Florida recount, the focused fury and organized outrage of the ranting right led press and politicians alike to edit their options and alter history.