McCain Camp Joins Bush and Delay: There Are No Uninsured 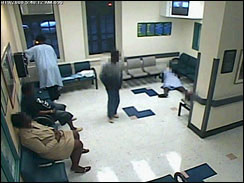 As I've noted previously, what passes for John McCain's health care plan is virtually identical to the stillborn scheme from George W. Bush. Now, the McCain campaign has joined President Bush and indicted former House Majority Leader Tom Delay in offering a novel solution - denial - to the problem of America's 46 million uninsured. As it turns out, they simply don't exist.
That's the word from the architect of John McCain's health care proposals, John Goodman. No one in the United States is uninsured, Goodman, pronounced, because Americans have access to emergency room care. As the Dallas Morning News reported:

Mr. Goodman, who helped craft Sen. John McCain's health care policy, said anyone with access to an emergency room effectively has insurance, albeit the government acts as the payer of last resort. (Hospital emergency rooms by law cannot turn away a patient in need of immediate care.)
"So I have a solution. And it will cost not one thin dime," Mr. Goodman said. "The next president of the United States should sign an executive order requiring the Census Bureau to cease and desist from describing any American - even illegal aliens - as uninsured. Instead, the bureau should categorize people according to the likely source of payment should they need care. So, there you have it. Voila! Problem solved."

For a candidate who diagnosed the economic downturn as "psychological", the semantic solution to the crisis in medical coverage is unsurprising. And to be sure, with its GOP "Emergency Room" health care plan, the McCain campaign is just following in the footsteps of Republicans deniers George W. Bush and Tom Delay.
During a July 2007 visit to Cleveland, President Bush unveiled his emergency room cure for the ills of the U.S. health care system. Rejecting the expansion of the successful - and even more popular - State Children's Health Insurance Program (S-CHIP), Bush assured Americans that there was no crisis in medical coverage:

"I mean, people have access to health care in America. After all, you just go to an emergency room."

But while his comments were greeted in England (as the AP reported) with "derisive laughter," no one was chuckling back home.
As it turns out, of course, millions more Americans are denied - or are forced to deny themselves - health care each year. Just days after Delay spoke, a new report from the Economic Policy Institute showed a dramatic decline in employer-provided health care. That drop-off from 64.2% of Americans covered through workplace insurance in 2000 to just 59.7% in 2007 added 2.3 million more people to those without coverage. And in June, a devastating new assessment from the Commonwealth Fund showed fully 25 million Americans are now "underinsured," a staggering 60 percent jump since 2003. All in all, 42% of the people in the United States under age 65 have insufficient insurance - or simply none at all.
(As it turns out, the recent dip in the number of uninsured to 45.7 million is due almost exclusively to expanded state and federal government insurance programs, including Medicare, Medicaid and SCHIP. Of course, John McCain joined President Bush in opposing the expansion of the popular program providing coverage for children.)
And to be sure, America's overflowing emergency rooms do not have the capacity, staffing or funding to be the health care solution of last resort. A 2006 report by the Institute of Medicine revealed that U.S. emergency rooms can barely cope with the volume of patients in the best of circumstances:

The study cited three contributing problems to the rise in emergency room visits: the aging of the baby boomers, the growing number of uninsured and underinsured patients, and the lack of access to primary care physicians.
The report found that 114 million people, including 30 million children, visited emergency rooms in 2003, compared with 90 million visits a decade ago. In that same period, the number of U.S. hospitals decreased by 703, the number of emergency rooms decreased by 425, and the total number of hospital beds dropped by 198,000, mainly because of the trend toward cheaper outpatient care, according to the report.

And that's in the best of times; the forecast for the worst of times is grimmer still. A March 2008 study from the House Oversight and Government Reform showed an American ER system woefully unprepared to handle a "predictable surprise" of a terrorist attack on the scale of the 2004 Madrid bombing:

The results of the survey show that none of the hospitals surveyed in the seven cities had sufficient emergency care capacity to respond to an attack generating the number of casualties that occurred in Madrid. The Level I trauma centers surveyed had no room in their emergency rooms to treat a sudden influx of victims. They had virtually no free intensive care unit beds within their hospital complex. And they did not have enough regular inpatient beds to handle the less severely injured victims. The shortage of capacity was particularly acute in Los Angeles and Washington, D.C.

Particularly acute in Los Angeles, indeed. As CBS reported, security cameras captured the death last year of Edith Isabel Rodriguez in a Los Angeles emergency room lobby, a woman who lay without help on the floor for 45 minutes as hospital personnel passed by.
And the scene was repeated on June 19 in New York, where 49 year old Esmin Green collapsed and died while waiting almost 24 hours in the emergency room of a psychiatric hospital. (The video of the CBS segment is available here.)
Later this summer, John McCain will address the Republican National Convention in Minneapolis. There, he will talk in glowing terms about the McCain health care plan, one virtually identical in its outlines - and dismal shortcomings - as that of President Bush. As Minnesota Public Radio recently detailed, the emergency rooms of Minneapolis and St. Paul are prepared to handle the GOP faithful should they become sick before, during or after McCain's speech.
Then again, in the America of George Bush, John McCain and the Republican Party, no one is denied health care, not even the "whiners." They can always go to the emergency room.

2 comments on “McCain Camp Joins Bush and Delay: There Are No Uninsured”