One week after its devastating documentary ("The Warning") on federal regulator Brooksley Born's unheeded warning in the 1990's about the potential disaster in the offing for the U.S. financial system, on Tuesday the PBS program Frontline aired an episode which portrayed the subsequent recession's harsh impact on the residents of an Upper East Side New York neighborhood. But in focusing on the nouveau pain of the upper-middle class and above, "Close to Home" was hardly breaking new ground. For months, in their coverage of the recession supposed liberal media bastions CBS News and New York Times have been lamenting the suffering of the tragically rich.
As PBS producer Ofra Bikel described her objective:

I decided not to do a program about the down-and-outs. So much of it was done on television: sad, heartbreaking stories of plants -- even whole towns -- closing down, people left with no jobs, no savings, no homes and no future.
I felt that I wanted to do something about the middle class or even the upper middle class -- the very people who usually outlive the economic storms and who do not talk very much about their finances, their losses and their problems, especially to strangers. How are they doing now?

In Bikel's defense, the hair salon owner and the customers she profiled in her own toney Manhattan neighborhood were not the Wall Street investment bankers and traders who helped bring the American economy to its knees. And to be sure, many of their stories of lost jobs, declining savings and diminished prospects resonated with viewers.
But at the end of the day, many of those in what Bikel deemed "one of the most affluent and powerful neighborhoods in America" are hardly proxies for the nation's broad middle class. They are about as representative, it turns out, as the readers of The New York Times' regular feature, "Wealth Matters."
In his columns examining the "strategies that the wealthy use to manage not only their money but their overall well-being," the Times Paul Sullivan has also catalogued the supposedly outsized impact of the recession on the newly not-quite-as-rich. For example, in an October 2 piece titled "Too Rich to Worry? Not in This Downturn," Sullivan warned:

It turns out the other half -- or at least the tiny slice who live at the top of the wealth pyramid -- are not sleeping any better than the rest of America.
At a closed-door meeting of advisers to family offices -- which serve families who typically are worth more than $500 million -- I learned that the super-rich are just as concerned about the future as everyone else.
Even though the stock market has rebounded from its March 9 low, the family office advisers said many of their wealthiest clients were bracing for more bad news and wondering how it would affect their family unity.
"They are now looking at financial planning and things middle-class families live by," Kathryn McCarthy, a leading adviser to wealthy families, including the Rockefellers, said at the gathering this week convened by Bessemer Trust.
Before you start laughing up your sleeve, be advised that this is not a good thing. When the super-rich get cold feet, the rest of America gets swine flu.

Two weeks later ("All This Anger Against the Rich May Be Unhealthy"), Sullivan seemed stunned that he had "touched a particularly raw nerve" among readers who blasted his previous column as "so stupid that you ought to be slapped for it." Without noting record levels of income inequality not seen since the 1920's, the massive windfall for the wealthy from the Bush tax cuts or the absence of data to conclusively show that reduced deductions hurts charitable giving, Sullivan warned:

A big concern among the wealthy right now, their advisers say, is not populist anger but how it might translate into tax-the-rich legislation on the federal and state levels. Their concern is twofold.
The first is that any tax increase has a direct impact on the income they withdraw from their portfolios. More money going to the government means less to live on...
The second concern may be disheartening for those who are angry at the rich but like the museum exhibition or scholarship they pay for: increased taxes could cut into donations. While there is not a direct correlation between tax deductibility and personal donations, there is a correlation between increased taxes in a continued weak economy and charitable giving.

But the New York Times penchant to ask "brother, can you spare a million?" is not limited to Paul Sullivan's fawning over the rich and famous. In an August 20, 2009 feature, David Leonhardt and Geraldine Fabrikant concluded, "After a 30-year run, [the] rise of the super-rich hits a sobering wall." As it turns out, the halcyon days of record-setting inequality are so 2007:

They began to pull away from everyone else in the 1970s. By 2006, income was more concentrated at the top than it had been since the late 1920s. The recent news about resurgent Wall Street pay has seemed to suggest that not even the Great Recession could reverse the rise in income inequality.
But economists say -- and data is beginning to show -- that a significant change may in fact be under way. The rich, as a group, are no longer getting richer. Over the last two years, they have become poorer. And many may not return to their old levels of wealth and income anytime soon.

To illustrate the down-on-their-luck wealthy, the Times turned to software entrepreneur John McAfee as a case study of the perils of the life of excess:

In 2007, Mr. McAfee sold a 10,000-square-foot home in Colorado with a view of Pike's Peak. He had spent $25 million to buy the property and build the house. He received $5.7 million for it. When Lehman collapsed last fall, its bonds became virtually worthless. Mr. McAfee's stock investments cost him millions more.
One day, he realized, as he said, "Whoa, my cash is gone."
His remaining net worth of about $4 million makes him vastly wealthier than most Americans, of course. But he has nonetheless found himself needing cash and desperately trying to reduce his monthly expenses.

But for advocacy of trickle-down economics so naked it would make Ronald Reagan blush, you need to turn on CBS News with Katie Couric. 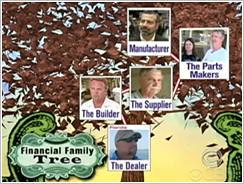 Invariably, the CBS Evening News series "The Financial Family Tree" shows the ripple effect from the wealthiest Americans on down the economic food chain. From the struggling recreational boat manufacturer and salesman in Florida and restaurateurs in Massachusetts ("Recession Reaches Nantucket Island") to the vineyards of Northern California and a baking company in the Cayman Islands ("Sagging Sales, Even in a Beach Paradise"), most of the stories start with the diminished consumption of the better-off.
For example, declining sales of U.S. wine led to layoffs at Fetzer Vineyards. For one of its former executives who lost his six-figure salary, that had dire implications for the horses he and his wife have been raising for years on their "wine country spread:"

Putting on the brakes includes dropping plans to enter horse shows that can cost $2,000.
"She is material to go on to the nationals," Banach said patting a horse."But we won't be going."

Mercifully, as CBS reported Sunday, the recession has an upside for the well-to-do, who can find bargains on their designer clothes at booming high-end thrift stores:

At Manhattan's Memorial Sloane Kettering Thrift Ship in New York City, which caters to a well-heeled clientele. They've got thousand-dollar Chanel suits on sale, so business is brisk...
One thrift shopper told CBS News she doesn't miss retail shopping.
"I bought a David Meister dress here that was from this year and it was $398 online and I got it for $8 and I wore it to a wedding on Sunday," she said.

In June, CBS announced that "in recession, swapping is the new shopping" in Miami Beach:

It's Thursday evening and a posh Miami Beach home has been turned into a bargain basement - where swapping is the new shopping.
Fifteen shopaholics clean out their closets, and trade gently-worn Gucci for someone else's Chanel.
"Yeah, not taking out your wallet is fun and getting something new is fun," said Trudy Corey, one of the Miami Beach "shoppers."

Apparently, it's cheaper than ever to dress for success when you're "going Galt."
Of course, none of the above is meant to diminish the losses, hardship and suffering of Americans of every region, line of work and income strata as a result of the Bush recession. But it's hard to expect much sympathy for the well-heeled when lower and middle-class people are getting kicked in the teeth. In any event, as the not-so-subtle coverage by the New York Times, CBS and even PBS suggests, the class war in America is over or, perhaps, is only being waged by one side.
UPDATE: As the AP reported in April, one of group of people is doing better than ever serving the tragically rich during the recession: their therapists.