Mitt Romney Deserves No Credit and No Apologies on Russia

Former Secretary of State Madeleine Albright was back in the headlines this week--not for any particular wisdom regarding authoritarian regimes and movements she shared with the House Intelligence Committee, but for this:

With those words, Albright triggered yet another round of "Mitt Romney was right" stories over his March 2012 claim that Russia was America's "number one geopolitical foe." Just as they did after Edward Snowden's escape to Moscow and Russia's 2014 incursion into Ukraine and occupation of Crimea, media outlets of all political stripes are once again declaring Romney was prescient about the threat posed by Vladimir Putin. (Among the commentators praising Mitt was the man himself, who took to the airwaves to slam President Obama's "naivete" and "faulty judgment.") It's not just Hot Air, The Daily Caller, and others among the usual suspects on the right demanding apologies to and credit for their vanquished 2012 White House hopeful. Newsweek and ABC News ("Mitt Romney finally gets credit years later for his warnings on Russia") jumped on the "Romney was wronged" bandwagon, too. 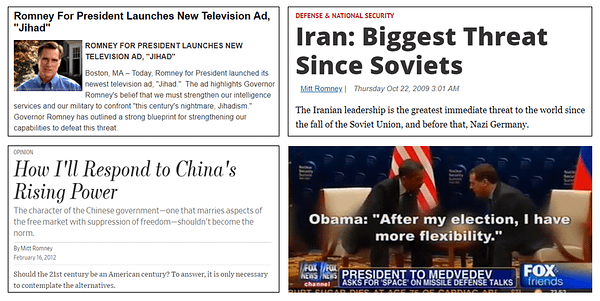 But Secretary Albright need not have apologized, and the media consensus about the "visionary" Mitt Romney should not be giving credit where it is not due. After all, as a presidential candidate in 2008 and again in 2012, then-Gov. Romney compiled a very long list of top threats to the United States, a list that was alternately led by "radical Islamist terror," Iran, and China. Until President Obama's supposed "open mic gaffe" on March 26, 2012, Russia was almost an afterthought in Romney's national security strategy. And as it has turned out, now-Sen. Romney's sheepish acquiescence to Donald Trump's coddling of the Putin regime has made a mockery of his supposed clear-eyed, hard-nosed realism on Russia.
Continue reading at Daily Kos.