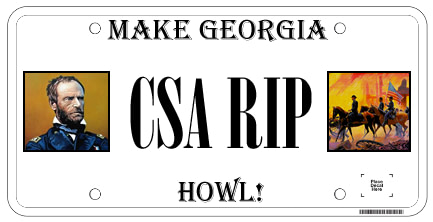 The state of Georgia this week began offering a new version of its vehicle license plate featuring the Confederate battle flag. Sponsored by the Georgia division of the Sons of Confederate Veterans (to whom a portion of the purchase price and annual registration fees will go), the revised design has many people inside the state and out howling mad.
In response to the outcry, Georgia SCV commander Jack Bridwell asked, "What's the big deal?" Echoing Bridwell's explanation that "the design is just people trying to show who they are and trying to be proud of their heritage," Sons of Confederate Veterans spokesman Ray McBerry invited other groups to do the same:

"We believe that all people ought to be able to celebrate their history and their heritage, and that includes Southerners. We did anticipate that there could be some folks who would not like that, but we encourage them to go and make application for their own specialty plates."

Now, a little known organization is taking him up on the offer. The group, calling itself The American People, is sponsoring a license plate to mark the 150th anniversary of Union General William Tecumseh Sherman's March to the Sea.
After capturing the South's vital manufacturing center and rail hub at Atlanta, Sherman's troops marched southeast to Savannah leaving a swath of ruin in their wake. Between November 15th and December 21st, 1864, Sherman more than accomplished his objective to "create havoc and destruction of all resources that would be beneficial to the enemy." Sherman's brilliant campaign (or what the Sons of Confederate Veterans brand "atrocities and war crimes") hastened the end of the Confederacy and with it the enslavement of four million Americans.
The new Sherman's March plate features images of General Sherman and Atlanta in flames on a plain white background. In addition to a small U.S. flag, the new tag features Sherman's immortal words, "Make Georgia Howl." Each purchase also comes with a commemorative edition of General Sherman's September 12, 1864 letter to the people of Atlanta and an authentic set of Lincoln Logs complete with miniature reproductions of "Sherman's Neckties."
Like the Sons of Confederate Veterans plate, the Sherman's March car tag costs $80 to purchase and $55 to renew. $10 from each goes to The American People and its projects. These include taking every Georgia school student to Andersonville, where 13,000 Union prisoners died from starvation, disease and abuse. Proceeds will also go towards renovation to the Confederate monument at Stone Mountain, etching William Tecumseh Sherman's warnings into the rock:

"My aim then was to whip the rebels, to humble their pride, to follow them to their inmost recesses, and make them fear and dread us."
"We cannot change the hearts and minds of those people of the South, but we can make war so terrible and make them so sick of war that generations would pass away before they would again appeal to it."

The new Sherman's March plate hasn't been warmly received by all residents of the Peach State. "Such language will no doubt be offensive to some," a spokesman for The American People acknowledged before adding, "But then again, it's part of our heritage."
(The above is obviously a joke. And a horrible idea, for the same reason that President Ulysses Grant rejected a proposal to paint a mural inside the Capitol Dome of Robert E. Lee's surrender at Appomattox. "No, gentlemen, it won't do. No power on earth will make me agree to your proposal." Grant declared. "I will not humiliate General Lee or our Southern friends in depicting their humiliation and then celebrating the event in the nation's capitol.")