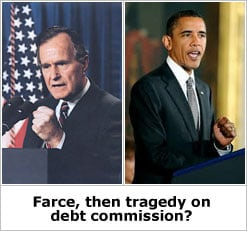 Karl Marx famously said that historical events occur twice: first as tragedy, then as farce. But when it comes to his debt commission, President Obama is in danger of standing that old chestnut on its head. Unlike President George H.W. Bush's almost comic dismissal of the recommendations of a Congressional debt panel in 1989, Obama may actually listen to this one. And that would be tragic, indeed.
If the saga of Obama's National Commission on Fiscal Responsibility and Reform sounds familiar, it should. Now as then, Republicans decried any deficit-cutting effort that could lead to higher taxes.
In January, John McCain joined six other Senate Republicans in successfully filibustering the deficit commission legislation they co-sponsored:

"I want a spending commission, and I worry that this commission could have gotten together and agreed to increase taxes. Spending cuts are what we need. We don't need to raise taxes."

As the New York Times reported, during the 1988 campaign Bush aides similarly referred the panel set up in the wake of the October 1987 stock market crash as "the national tax commission."

Congressional Democrats invented the commission to work a miracle - to offer a bipartisan solution to the budget deadlock. Their model was the Social Security commission in 1983. But there was a crucial difference. President Reagan and Congressional leaders agreed in advance to accept outside advice on Social Security. Mr. Reagan and Mr. Bush saw the economic commission as a Democratic maneuver to raise taxes - a well-founded suspicion. With outside encouragement, the seven Democratic members and some of the seven Republicans would surely have agreed that the budget couldn't be balanced by spending cuts alone.

But as the Times noted in explaining the 1989 debt commission's failure, "But Mr. Bush left them no room. He scorned the commission publicly, then locked the door with commitments to a 'flexible freeze'' on spending and no new taxes." The result was a hopelessly deadlocked committee whose proposals were dead on arrival:

The National Economic Commission's majority report on balancing the budget is a shamelessly superficial summary of President Bush's proposals. It endorses them all and rejects higher taxes. A minority report by six Democrats is more analytical and more critical of Mr. Bush. But it ducks the tax question, too. The enterprise thus ends, just as Mr. Bush had hoped, as a bipartisan flop.

If the presentation this week by chairmen Erskine Bowles and Alan Simpson is an indication of the things to come, President Obama should euthanize this panel as well. As Paul Krugman lamented Friday:

"Can anything be salvaged from this wreck? I doubt it. The deficit commission should be told to fold its tents and go away."

Here's why. The "chairmen's mark" 3 to 1 ratio of spending cuts to tax increases mistakes the real sources of budgetary growth while denying the federal government badly needed revenues. As Krugman and Kevin Drum detail, it is the growth of health care spending - and not Social Security - which must addressed to salvage the spending side of the ledger. Meanwhile, the arbitrary target setting revenue at 21% of GDP comes at a time when the overall tax burden is at its lowest level since 1950 and record income inequality is at its highest since 1929. With a higher retirement age and an end to the mortgage interest deduction and earned income tax credit, working Americans and the elderly would suffer draconian cuts even as the top-tier taxpayers received yet another massive, budget-busting windfall from the U.S. Treasury.
For his part, President Obama urged patience, caution and compromise:

"The only way to make those tough choices historically has been if both parties are willing to move forward together," he said at a news conference in Seoul, South Korea. "And so before anybody starts shooting down proposals, I think we need to listen, we need to gather up all the facts. I think we have to be straight with the American people."

But being straight with the American people would require acknowledging, as Krugman suggested, that the debt commission's work so far is "a compromise between the center-right and the hard-right... trying to smuggle in the same old, same old -- tax cuts for the rich and erosion of the social safety net." That cowardly Congressional Republicans are now waiting for the commission's report before offering spending cuts of their own is further evidence of Krugman's suspicions.
If the National Commission on Fiscal Responsibility and Reform continues on its current path, President Obama like President Bush before him should bury its final report. Mugged by budgetary reality, Bush 41 the next year raised the top personal income tax rate despite his promise of "read my lips: no new taxes." Barack Obama should stick to his own campaign pledge and do the same.