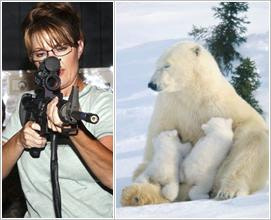 One sure measure of McCain VP pick Sarah Palin's extremism is her lawsuit to stop the Bush administration, no friend of the environment, from adding polar bears to the list of endangered species. Now, the Alaska governor has company, as a group of five oil and business organizations have joined in her legal battle against the declining population of the beloved white bears.
As the Washington Post detailed Sunday, the American Petroleum Institute, the National Association of Manufacturers (NAM), the U.S. Chamber of Commerce and the American Iron and Steel Institute have filed a lawsuit against Interior Secretary Dirk Kempthorne and U.S. Fish and Wildlife Service Director H. Dale Hall. With Palin, the groups seek to reverse Kempthorne's decision to list polar bears as a threatened species under the Endangered Species Act:

They object to what they call the "Alaska Gap" in relation to the special rule the federal government issued in May in conjunction with the polar bear's protected status. The rule, meant to prevent the polar bear's status from being used as a tool for imposing greenhouse gas limits, exempts projects in all states except Alaska from undergoing review in relation to emissions.

It should come as no surprise that NAM, which issued a hagiographic press release lauding Palin's selection by McCain Friday, was quick to line up with the Alaska governor. After all, she has been more than willing to deploy pseudo-science and outright deception to expand drilling at all costs.
From the beginning, Palin has peddled snake oil and bogus claims in her crusade against the polar bear. On August 4th, she announced her suit by declaring, "We believe that the Service's decision to list the polar bear was not based on the best scientific and commercial data available." Earlier this year, Palin blatantly lied about the scientific consensus while appearing with CNN's conservative talk show host, Glenn Beck:

"In fact, the number of polar bears has risen dramatically over the past 30 years. Our fear[(is] that extreme environmentalists will use this tool, the ESA, to eventually curtail or halt the North Slope production of very rich resources that America needs."

Sadly for Palin, the overwhelming body of evidence, including findings from her own Alaska Department of Fish and Game, contradict her falsehoods. Ian Stirling, an emeritus scientist with Canada's Department of the Environment and an adjunct professor at the University of Alberta, has been studying polar bear populations for 37 years. As Wired detailed, his conclusions are a clear rebuke to Palin:

"Polar bear populations have not been increasing for the past 30 years, and that's a well-known fact."
In fact, the polar bear population has actually declined by 20 percent in Alaska's Southern Beaufort Sea since the mid-1980s, he says, referring to peer-reviewed research that he's conducted with other scientists for the US Geological Survey. The reason: Loss of their habitat in the form of melting ice.
The research reports with this information have been available to Palin for more than a year, Stirling says.

Even the state of Alaska's own biologists disagree with Governor Palin. As the Anchorage Daily News documented in May, email shows the scientists at the state's Department of Fish and Game contradicted Palin's public statements:

The state's marine mammal scientists agreed last year with federal researchers who concluded polar bears are threatened with extinction because of a shrinking ice cap.
A newly released e-mail from last fall shows that the state's own biologists were at odds with the Palin administration, which has consistently opposed any new federal protections for polar bears under the Endangered Species Act.
The state's in-house dispute seems to refute later statements by Gov. Sarah Palin that a "comprehensive review" of the federal science by state wildlife officials found no reason to support an endangered-species listing for the northern bears. The governor invoked the state's own scientific work both in a cover letter to the state's official polar bear comments, and in an opinion piece published in the New York Times.

Nonetheless, Palin went forward with her lawsuit in August. As it turns out, her Lysenkoism doesn't end with polar bears. While even the Republican Party platform cites "human activity" as having "increased the amount of carbon in the atmosphere," Sarah Palin has concluded otherwise. When it comes to global warming, she said, "I'm not one though who would attribute it to being man-made."
Despite campaign adviser Douglas Holtz-Eakin's claim that "the governor is going to support senator McCain's policies" for protecting polar bears, Sarah Palin in ways large and small will apparently continue her war against them. On Thursday, Palin chose the grizzly bear over the polar bear and other candidates for the state's commemorative quarter.