As President Obama prepares for his State of the Union address, two stories Monday regarding his stimulus package highlighted his political conundrum. USA Today's quarterly survey of 50 economists produced a median estimate that the $787 billion American Recovery and Reinvestment Act (ARRA) prevented unemployment from reaching 10.8%, saving 1.2 million jobs as a result. But even as the economists praised the stimulus for restarting GDP growth, a CNN poll found that "nearly three out of four Americans think that at least half of the money spent in the federal stimulus plan has been wasted." Sadly for the President, perception - even when it's wrong - is reality.
To be sure, with unemployment at 10% and forecast to remain above 9% by the end of 2010, the continuing pain caused by the dismal job market is very real. But the dividends of the stimulus package to date, even with changing White House accounting rules for the 1.5 to 2 million jobs it claims to have saved, are clear and growing.
For the three month period which ended in June, the Economic Policy Institute announced the Obama stimulus measures overall added "up to 3 full percentage points of annualized growth in the quarter." For its part, the Wall Street Journal in September agreed with that assessment:

Many forecasters say stimulus spending is adding two to three percentage points to economic growth in the second and third quarters, when measured at an annual rate. The impact in the second quarter, calculated by analyzing how the extra funds flowing into the economy boost consumption, investment and spending, helped slow the rate of decline and will lay the groundwork for positive growth in the third quarter -- something that seemed almost implausible just a few months ago. Some economists say the 1% contraction in the second quarter would have been far worse, possibly as much as 3.2%, if not for the stimulus.

On Monday, the USA Today panel of economists concurred. 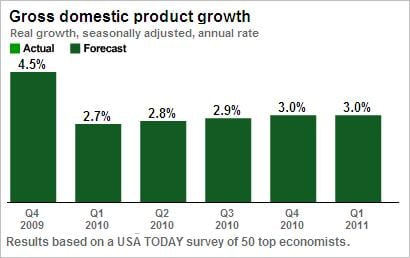 Unemployment would have hit 10.8% -- higher than December's 10% rate -- without Obama's $787 billion stimulus program, according to the economists' median estimate. The difference would translate into another 1.2 million lost jobs.
But almost two-thirds of the economists said the government should do more to spur job growth. Suggestions included suspending payroll taxes for Social Security and Medicare, increasing spending on infrastructure, enacting a flat tax on income and extending jobless benefits.

Importantly, as ProPublica documented in its recovery tracking project, only a fraction of the stimulus pot has been spent to date. As of January 25, 2010, only $172 billion of the program budget had spent so far with another $157 billion in process, leaving $251 billion in remaining funding. Meanwhile, by ProPublica's accounting, $93 billion in ARRA tax cuts have been paid out, with another $119 billion still to come.

But judging from CNN's polling, the Obama administration's message regarding the impact of the stimulus isn't getting through to the American people. Bombarded for months by Republican propaganda declaring the recovery package "a failure," CNN's respondents have clearly taken it to heart as part of that network's "Stimulus Project."

As a dumbfounded Joe Klein of Time concluded, "nearly three out of four Americans think the money has been wasted. On second thought, they may be right: it's been wasted on them":

Indeed, the largest single item in the package--$288 billion--is tax relief for 95% of the American public. This money is that magical $60 to $80 per month you've been finding in your paycheck since last spring. Not a life changing amount, but helpful in paying the bills.
The next highest amount was $275 billion in grants and loans to states. This is why your child's teacher wasn't laid off...and why the fire station has remained open, and why you're not paying even higher state and local taxes to close the local budget hole.

Americans' deep skepticism about the stimulus package reveals the extent of the Republicans' double victory - and President Obama's twin defeats - on the politics of the economy. Last year, Obama bent over backwards to accommodate the GOP on the ARRA, producing a package not only much smaller than the $1.2 trillion some of his own advisors insisted was required, but weighed down with tax cuts demanded by Republicans. For his near-compulsive bipartisanship, Barack Obama like Bill Clinton before him was rewarded with exactly zero GOP votes in the House. (As Paul Krugman warned a year ago, "Look, Republicans are not going to come on board. Make 40% of the package tax cuts, they'll demand 100%.")
And for his trouble, Americans blame Barack Obama and his Democratic Party for a recovery package that, slowly but surely, is working. As CNN, CBS, ABC and other networks parrot the talking points on stimulus from Republicans like Tom Coburn (R-OK), chances for additional - and badly need- federal funding for infrastructure, jobs programs and aid to states evaporate.
During his State of the Union, President Obama will announce more half-measures to help Americans still stuck in the grip of the recession. Sadly, three-quarters of them already believe the stimulus was half-wasted.