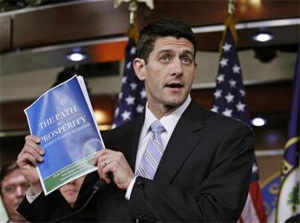 The Affordable Care Act, Republicans and their right-wing water carriers warn, is the worst thing to happen to America since slavery and the Fugitive Slave Act. But for Congressional Republicans in general and Paul Ryan in particular, Obamacare also happens to be the love that dare not speak its name. After all, Ryan's dangerous and unpopular voucher scheme to privatize Medicare not only depends on the success of the very kind of health insurance exchanges he now decries, but also requires the ACA to cover the 65 and 66 year-old beneficiaries he would drop from the program covering 49 million seniors. And as it turns out, the same Paul Ryan who would defund, delay or repeal Obamacare nevertheless wants to keep every penny in new revenue it generates in order to fund his massive tax cut windfall for the wealthy.
This week, Rep. Ryan called on Health and Human Services Secretary Kathleen Sebelius to resign over the troubled launch of the federal online health insurance exchange serving the 34 states who refused to build their own. But as it turns out, Ryan needs the exchange model to work almost as much as any Democrat. As Ezra Klein first explained almost three years ago, the privatization of Medicare contained in Ryan's "Path to Prosperity" blueprint and the GOP budget based on it requires it:

The current Medicare program is completely dissolved and replaced by a new Medicare program that "would provide a payment - based on what the average annual per-capita expenditure is in 2021 - to purchase health insurance." You'd get the health insurance from a "Medicare Exchange", and "health plans which choose to participate in the Medicare Exchange must agree to offer insurance to all Medicare beneficiaries, thereby preventing cherry picking and ensuring that Medicare's sickest and highest cost beneficiaries receive coverage."
Sound familiar?

Familiar, indeed. Alice Rivlin, who worked on Ryan's first version of the voucher, later confirmed to Klein that the idea was almost identical to the Affordable Care Act:

If Ryan-Rivlin will unleash ferocious innovation that holds costs down, then so too should the Affordable Care Act. So at the end of our conversation, I asked Rivlin, who supported PPACA, if I was missing something. She laughed. "I keep talking to Paul and trying to convince him of that," she said. "But even if he agreed with me, he couldn't say so."

Of course, Rep. Ryan also couldn't publicly say that his underfunded voucher scheme would inevitably lead to rationing as costs were dramatically shifted to seniors unable to pay them. Sadly for Ryan and the 95 percent of Congressional Republicans who voted for his budget, the Congressional Budget Office could. By 2030, CBO concluded Ryan's plan would cost seniors an extra $6,500 a year on average, with beneficiaries on the hook for 68 percent of their health care expenses. While the2012 and 2013 versions of the Ryan plan (which would continue traditional government insurance as one "public option" for seniors buying a Medicare plan with their subsidy) would not be as painful, the same cost-shifting dynamic remained.
Especially, it turns out, for future 65 and 66 year olds. Ryan's budget calls for raising Medicare's age of eligibility to 67 to save money. But if the Affordable Care Act is repealed, then these older and generally sicker Americans would be left to fend for themselves in the private insurance marketplace where the cost of a policy would be astronomical. (That is, if they could even purchase one. After all, ending Obamacare means letting insurers once again discriminate against those with pre-existing conditions.)
On the other hand, Ryan's 65 and 66 year olds dropped by Medicare could purchase private insurance with federal subsidies if Obamacare isn't repealed. But if that's the case, the GOP proposal to raise the eligibility age to 67 generates negligible savings, only $19 billion over 10 years in this week's latest CBO forecast.
Regardless, Republicans who want to repeal, delay, defund or otherwise damage Obamacare have to own up to one other glaring contradiction. They may hate what the ACA spends money on, but they love every dollar it raises from savings and new taxes.
In September, the ranking Democrat on the House Budget Committee Chris Van Hollen (D-MD) called Congressional Republicans to task for precisely that hoax:

[House Republicans] have to explain to the American people how they voted for a budget that includes all of the Medicare savings from ObamaCare, that includes the same level of revenue generated from ObamaCare and, in fact, would not even balance in 10 years, if not for the Affordable Care Act.

Van Hollen was actually giving the Republicans too much credit. Their budget, as we'll see below, doesn't balance in 10 years. But it does indeed count on all of the cost savings and new tax revenue that more than pay for the Affordable Care Act.
That's exactly what that 95 percent of House and Senate Republicans voted for when they blessed Paul Ryan's budget in 2011, 2012 and 2013. While repealing Obamacare, slashing Medicaid funding by a third and leaving roughly 38 million more people uninsured, the Ryan budget still runs up trillions in new red ink thanks to its massive tax cut windfall for the wealthy. Paul Ryan's blueprint does not, as Republicans claim, balance in 10 year because it does not identify a single tax break it will close to fill the gaping hole left by almost $5 trillion in tax cuts. And yet, the Ryan plan still assumes every single dollar in revenue generated to fund the Affordable Care Act. The $716 billion in savings from Medicare providers, the capital gains and Medicare payroll tax surcharges for households earning over $250,000 a year and other new revenue raisers are all still in there. As Ezra Klein explained "Paul Ryan's love-hate relationship with Obamacare" in March:

Every Ryan budget since the passage of Obamacare has assumed the repeal of Obamacare. Kinda. Ryan's version of repeal means getting rid of all the parts that spend money to give people health insurance but keeping the tax increases and the Medicare cuts that pays for that health insurance, as without those policies, it is very, very difficult for Ryan to hit his deficit-reduction targets.

Not just difficult, but virtually impossible. Obamacare, as the CBO has repeatedly projected, reduces the national debt over the next decade. Its revenue exceeds its spending by an estimated $109 billion over the next 10 years. But without the revenue-raising provisions from Barack Obama's Affordable Care Act, Paul Ryan and his GOP would have to plug a $1 trillion hole in their budget.
That's why they hate the sin, but love the sinner's money.