Remembering Kennedy - and the Republican Goal - on Health Care 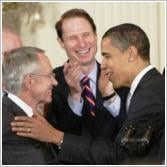 Senate passage of the health care bill this morning naturally brought fond remembrances of reform's long time champion, Ted Kennedy. While his successor Paul Kirk announced, "He's having a merry Christmas in heaven," Kennedy's long-time Massachusetts colleague John Kerry concurred, "Ted Kennedy is up there smiling."
But back here on earth, it's worth remembering why his Republican opponents waged an all-out war for four decades to block Ted Kennedy's dream of universal health care for the American people from ever being realized. At the end of the day, what Kennedy's close friend Orrin Hatch declared a "holy war" wasn't a crusade against "socialism", a "government takeover of health care", "rationing", "the doctor-patient relationship" or mythical "death panels."
It was all about politics. More than anything else, Republicans wanted to prevent an enduring Democratic majority. We know this, because Orrin Hatch and so many of his GOP allies told us so.
In a November interview with CNS, Senator Hatch revealed his darkest fear:

HATCH: That's their goal. Move people into government that way. Do it in increments. They've actually said it. They've said it out loud.
Q: This is a step-by-step approach --
HATCH: A step-by-step approach to socialized medicine. And if they get there, of course, you're going to have a very rough time having a two-party system in this country, because almost everybody's going to say, "All we ever were, all we ever are, all we ever hope to be depends on the Democratic Party."
Q: They'll have reduced the American people to dependency on the federal government.
HATCH: Yeah, you got that right. That's their goal. That's what keeps Democrats in power.

What Hatch in his ham-handed way was saying in public, Bill Kristol for decades was telling Republicans in private.
It was, after all, the former Quayle chief of staff turned GOP strategist who mobilized total Republican opposition to the Clinton health care initiatives of 1993 and 1994.
In December 1993, Kristol galvanized Congressional Republicans with a private memo titled, "Defeating President Clinton's Health Care Proposal." As the American Prospect recalled, Kristol's war plan:

Darkly warned that a Democratic victory would save Clinton's political career, revive the politics of the welfare state, and ensure Democratic majorities far into the future. "Any Republican urge to negotiate a 'least bad' compromise with the Democrats, and thereby gain momentary public credit for helping the president 'do something' about health care, should be resisted," wrote Kristol. Republican pollster Bill McInturff advised Congressional Republicans that success in the 1994 midterm elections required "not having health care pass."

Kristol's central strategy in obstructing Clinton's success in resolving the health care crisis was simply to deny its existence. Not content to offer a "simple, green-eyeshade criticism of the president's health care plan," Kristol insisted the GOP must "kill it outright." While advocating many of the same free-market reforms later peddled by George W. Bush and John McCain (tax credits, medical savings accounts, etc.), Kristol implored his allies that "passage of the Clinton health care plan in any form would be disastrous." His prescription:

And so it came to pass. In the Senate, long-time health care reform supporter Bob Dole (R-KS) in early 1994 adopted Kristol's mantra:

The rest, as they, is history.
This time around was little different. While conservative pollster and spinmeister Frank Luntz in May 2009 suggested masking Republican opposition ("You simply MUST be vocally and passionately on the side of REFORM"), from the moment the votes were tallied for Barack Obama in November 2008, the GOP's amen corner - including Bill Kristol - were clear that Democratic health care reform had to be stopped at all costs.
That was the word last year from Michael Cannon at the Cato Institute. Parroting the think-tank's claim that Obama's health care proposal is "socialized medicine," Cannon sounded Kristol's old clarion call:

Approvingly citing Norman Markowitz' assertion at PoliticalAffairs.net that "national health care [and other measures] will bring reluctant voters into the Obama coalition," Cannon fretted that "making citizens dependent on the government for their medical care can change the fates of political parties." For arch conservatives, that formula spells trouble for the GOP.
Columnist James Pethokoukis also picked up Kristol's baton. Writing in US News, he recounted the dire warning from a Republican strategist who told him, "Let me tell you something, if Democrats take the White House and pass a big-government healthcare plan, that's it." Concerned that "creating the Obamacare Class would pull America to the left," Pethokoukis echoed Cannon's obstructionist line.
And in February, Bill Kristol left no doubt that he believed the Republican Party should repeat the obstructionism that destroyed the Clinton health care plan in 1993 and 1994. GOP leaders in Congress, Kristol told Fox News' Neil Cavuto, should emulate the roadblock Republicans of the 1990's to block Obama's economic recovery package now and everything else - including health care reform - later:

"But the loss of credibility, even if they jam it through, really hurts them on the next, on the next piece of legislation. Clinton got through his tax increases in '93, it was such a labor and he had to twist so many arms to do it and he became so unpopular...
...That it made, that it made it so much easier to then defeat his health care initiative. So, it's very important for Republicans who think they're going to have to fight later on on health care, fight later on maybe on some of the bank bailout legislation, fight later on on all kinds of issues. It's very important for them, I think, not just to stay united at this time, though that's important, but to make the arguments."

And to be sure, Congressional Republicans listened. In an almost perfect replay of the unprecedented GOP opposition to the 1993 Clinton recovery and deficit reduction bill, zero House Republicans and only three Senators backed President Obama's $787 billion stimulus package. In this month's health care votes, Democrats convinced exactly one Republican in the House - and none in the Senate - to come along for the ride. Meanwhile, the obstructionist Senate GOP continues to set new records for using the filibuster.
Ultimately, Democratic health care reform, if and when finally signed into law, probably won't alter the political landscape for a generation. The watered-down legislation is not only deeply flawed, but President Obama's mishandling of its definition and marketing squandered much of the public's good will towards him and his party.
As for Republicans, they've consistently made their priorities clear. The health of the GOP trumps the health of the American people. The third pillar of the Democratic social contract - Social Security, Medicare, and universal health care - simply had to be stopped. For Republicans, the collapse of the U.S. health care system - the 50 million uninsured, 25 million more uninsured, millions of medical bankruptcies, near-monopolies in most insurance markets, double-digit cost increases and self-rationing of care, all of it worst in the states they represent - is a small price to pay for preventing a lasting Democratic majority.
UPDATE: The Obama White House, which has mishandled so many aspects of the halth care reform battle, at least got this right on its blog: "For Opponents, It Was Never About the Bill."