Republicans Shelby, Paul Call for Over $1 Trillion in Budget Cuts

In the run-up to November's midterm elections, David Leonhardt of the New York Times presciently warned, "In their Pledge to America, Congressional Republicans have used the old trick of promising specific tax cuts and vague spending cuts," adding, "It's the politically easy approach, and it is likely to be as bad for the budget as when George W. Bush tried it." After just hours as House Speaker, John Boehner confirmed Leonhardt's suspicions by refusing to provide any details of spending cuts and then breaking his promise about "saving taxpayers $100 billion almost immediately." And now, Republican Senators Rand Paul and Richard Shelby are taking the GOP's fiscal irresponsibility to new lows by demanding draconian - and catastrophic -cuts in federal spending as high as 44%.

As ThinkProgress reported, Alabama Senator Shelby believes that $1 trillion can be slashed from the roughly $3.8 trillion U.S. budget this year. Without providing any specifics to his audience in St. Clair County, Alabama, Shelby casually announced:

"I honestly believe we could cut 30 percent across the board."

As part of his grandstanding on the U.S. debt ceiling (which Republicans raised seven times under George W. Bush), Kentucky Senator Paul insisted last month, "I think that every piece of major legislation that goes forward from now on needs to have attached to it spending cuts." On Thursday, Paul told Sean Hannity that he wants to chop in one fell swoop what would be the equivalent of 44% of all federal spending:

"I think an ironclad rule that we will balance the budget from here on after, and that's what it's going to take."

What that would really take, of course, is the destruction of basic government services, ones which the American people have repeatedly made clear they want to protect.
Erasing in one year the entire estimated $1.2 trillion deficit - roughly the same level now as the day George W. Bush left office - would be cataclysmic. ThinkProgress did the math:

After all, to balance the budget "from here on after" once the debt ceiling is raised necessarily implies balancing the budget this year. And to do so without raising any additional revenue would entail a 44 percent cut in literally everything the government does: everything from Social Security, Medicare, and defense spending to highway funds, the FBI and the Coast Guard. Removing Social Security and defense from the equation then requires an 89 percent cut in everything else.

Remember, the Republicans have already backed away from their demand that $100 billion be cut from the $477 billion in non-defense discretionary spending. And as this December Washington Post chart breaking down President Obama's proposed FY 2011 (above) shows, Shelby and Paul are proposing a fiscal suicide pact for the United States.
That $3.8 trillion spending bill includes $895 billion for national defense and $730 billion for Social Security. Medicare ($491 billion), Medicaid ($297 billion) and interest on the national debt ($251 billion) are mandated by law. Those five areas alone - ones the GOP Pledge to America said Republicans would not touch - represent over $2.6 trillion in spending.
And as it turns out, most Americans want that spending, preserved, too. While a recent Reuters/Ipsos poll showed 71% oppose raising the debt ceiling:
Expensive benefit programs that account for nearly half of all federal spending enjoy widespread support, the poll found. Only 20 percent supported paring Social Security retirement benefits while a mere 23 supported cutbacks to the Medicare health-insurance program.
A CBS News survey this week found that 77% prefer cutting spending to only 9% who chose raising taxes as a means of reducing the deficit. Yet 62% of respondents could not name a single area of the budget they would slash.
An eye-opening poll last April from The Economist found that the only area of the federal budget which more than one-third of Americans supported cutting was foreign aid. "Bummer, then," Ezra Klein of the Washington Post wrote, "that it accounts for less than a single percent of the budget." 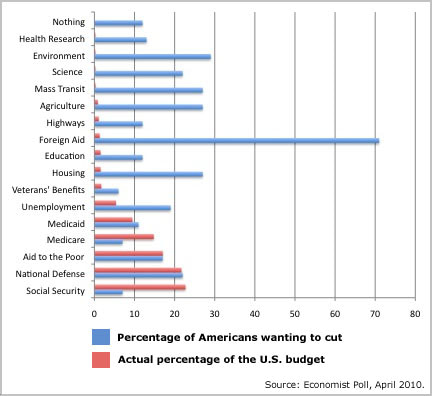 (For more on the stunning chart of what Americans are willing to cut versus where their government actually spends their money, see Annie Lowrey.)
That same month, another survey from CBS and the New York Times made clear, the Tea Partiers themselves have taken the big ticket items off table when it comes to budget cuts:

Despite their push for smaller government, they think that Social Security and Medicare are worth the cost to taxpayers...
And nearly three-quarters of those who favor smaller government said they would prefer it even if it meant spending on domestic programs would be cut.
But in follow-up interviews, Tea Party supporters said they did not want to cut Medicare or Social Security -- the biggest domestic programs, suggesting instead a focus on "waste."
Some defended being on Social Security while fighting big government by saying that since they had paid into the system, they deserved the benefits.

Which leaves us with David Leonhardt's cowardly contradiction: Republicans talk tough about painful budget cuts they lack the backbone to explain. As for Richard Shelby, by Saturday his spokesman Pam Simpson told ThinkProgress she was unaware of the Senator's 30% target. Instead, she "said the Alabama senator wants to revert back to 2008 spending levels."
That would be the same broken spending cut pledge House Republicans have already said they won't meet.