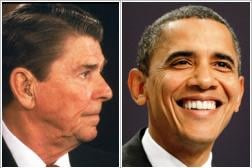 This weekend's Reagan centennial predictably produced paeans to the great tax cutter who never was. After all, in the wake of the his budget-busting 1981 tax cuts which ultimately tripled the national debt, Reagan raised taxes six of his eight years in office and 11 times overall. As it turns out, the Great Tax Cutter is the current occupant of the Oval Office, President Barack Obama.
Over just the past few days, two analyses by the AP revealed that "for the third straight year, American families and businesses will pay less in federal taxes than they did under former President George W. Bush" and "Taxpayers at most income levels have seen their federal income taxes drop under President Barack Obama." But even before December's compromise extending the Bush tax cuts for two years, Obama had already delivered the largest ever two-year tax relief to Americans as part of his 2009 stimulus program.
Previewing the final vote on the American Recovery and Reinvestment Act, Steve Waldman argued that in absolute dollar terms, "the tax cuts in this stimulus plan appear to be the biggest in history":

The compromise stimulus plan includes $282 billion in tax cuts over two years.
According to the Wall Street Journal, Bush's first two years of tax cuts amounted to $174 billion. A second batch in 2004 and 2005 cost $231. And those were thought to be bigger than the tax cuts offered by Reagan, Kennedy or others.
Now, perhaps some new analysis will show that the tax cuts end up not quite being the largest in history by this measure or that. But it's clear they're massive.

"Surely," Waldman concluded, "it ought to be a big story." But thanks to the cacophony of the right-wing rage machine combined with feeble salesmanship from the White House, that big story remains largely untold.
In October, the New York Times asked, "What if a president cut Americans' income taxes by $116 billion and nobody noticed?" As it turns out, that question neatly summed up the sad dynamic that helped doom Democrats in the 2010 midterm elections. Stephen Colbert famously declared that "reality has a well-known liberal bias." But not, the New York Times explained, when no one is paying attention to it.

In a troubling sign for Democrats as they head into the midterm elections, their signature tax cut of the past two years, which decreased income taxes by up to $400 a year for individuals and $800 for married couples, has gone largely unnoticed.
In a New York Times/CBS News Poll last month, fewer than one in 10 respondents knew that the Obama administration had lowered taxes for most Americans. Half of those polled said they thought that their taxes had stayed the same, a third thought that their taxes had gone up, and about a tenth said they did not know. As Thom Tillis, a Republican state representative, put it as the dinner wound down here, "This was the tax cut that fell in the woods -- nobody heard it."

That was especially true of the supposedly anti-tax Tea Party crowd. Another CBS News poll in February 2010 revealed the mass delusion of the American people in general and Tea Baggers in particular when it comes to the Obama tax cuts. A quarter of respondents said the Obama administration increased taxes while 53% said they were unchanged. Only 12% rightly answered that federal income taxes had come down under President Obama.
But among the confused Tea Partiers, the belief is akin to asserting the sun orbits the earth:

It's no wonder that former Reagan Treasury official Bruce Bartlett aptly concluded, ""For an antitax group," Bartlett aptly concluded, "they don't know much about taxes."
Also overlooked in the successful right-wing narrative is that the American tax burden hasn't been this low in generations. Thanks to the combination of the Bush Recession and the Obama tax cuts, the AP reported, "as a share of the nation's economy, Uncle Sam's take this year will be the lowest since 1950, when the Korean War was just getting under way." In January, the Congressional Budget Office (CBO) explained that "revenues would be just under 15 percent of GDP; levels that low have not been seen since 1950." That finding echoed an earlier analysis from the Bureau of Economic Analysis. As USA Today reported last May, the BEA data debunked yet another right-wing myth:

Federal, state and local taxes -- including income, property, sales and other taxes -- consumed 9.2% of all personal income in 2009, the lowest rate since 1950, the Bureau of Economic Analysis reports. That rate is far below the historic average of 12% for the last half-century. The overall tax burden hit bottom in December at 8.8% of income before rising slightly in the first three months of 2010.
"The idea that taxes are high right now is pretty much nuts," says Michael Ettlinger, head of economic policy at the liberal Center for American Progress.

This isn't to suggest that President Obama hasn't raised any taxes or that he shouldn't in the future. (As Politifact rightly pointed out, Obama's vague statement to Bill O'Reilly that "I didn't raise taxes once" doesn't account for new fees on tobacco and tanning salons, among other hikes.) And given the magnitude of future federal budget deficits at a time of low income tax rates, after the economic recovery is further along the United States will almost certainly have to raise taxes.
If this all sounds familiar, it should. Back in 1984, Walter Mondale accepted the Democratic nomination to oppose Ronald Reagan, telling Americans some hard truths:

Whoever is inaugurated in January, the American people will have to pay Mr. Reagan's bills. The budget will be squeezed. Taxes will go up. And anyone who says they won't is not telling the truth to the American people...
Let's tell the truth. It must be done, it must be done. Mr. Reagan will raise taxes, and so will I. He won't tell you. I just did.
There's another difference. When he raises taxes, it won't be done fairly. He will sock it to average-income families again, and leave his rich friends alone. And I won't stand for it. And neither will you and neither will the American people.
To the corporations and freeloaders who play the loopholes or pay no taxes, my message is: Your free ride is over.

Mondale lost in a landslide, but he was right. Ronald Reagan did raise taxes, but also bequeathed a legacy of mushrooming national debt, growing income inequality and expanded government.
Ronald Reagan was not the great tax cutter. That title belongs to Barack Obama.
At least for now.