The Myth of the Mainstream Tea Party 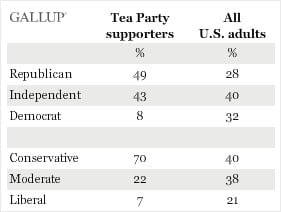 In the wake of two new surveys from Gallup and the Winston Group, the conservative blogosphere and general media alike have been quick to proclaim the Tea Party movement "mainstream." While the Los Angeles Time promoted the "Myth-Busting Polls," one right-wing blog laughingly warned of a "Suicide Watch at DNC HQ." But while the new numbers might suggest that demographically, "Tea Party members are average Americans," politically they most certainly are not. As it turns out, Gallup and Winston like Quinnipiac and CNN before them confirmed that the vast majority of Tea Baggers are ideologically conservative and consistently vote Republican.
But you'd never know from today's headlines. While The Hill, for example, informed readers, "Four in 10 Tea Party members are Dems or Independents," the numbers tell another story:

The national breakdown of the Tea Party composition is 57 percent Republican, 28 percent Independent and 13 percent Democratic, according to three national polls by the Winston Group, a Republican-leaning firm that conducted the surveys on behalf of an education advocacy group. Two-thirds of the group call themselves conservative, 26 are moderate and 8 percent say they are liberal.

In its summary declaring "Tea Partiers are Fairly Mainstream in Their Demographics," Gallup was quick to acknowledge:

Just how conservative they are is reflected in the Gallup numbers. While 40% of U.S. adults overall identify themselves as "conservative," 70% of Tea Baggers make the same claim. The right-wing skew is also reflected in the ranks of moderates (22% vs. 38%) and liberals (7% vs. 21%) compared to the overall voting public. 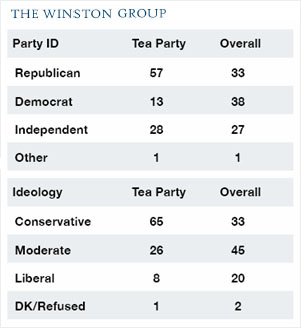 And to be sure, the new profile of the age, education, income and race of self-professed Tea Party supporters doesn't change the inescapable truth: they vote Republican.
While their members might lie, the numbers don't. Far from being the "independents" trumpeted by half-term Alaska Governor Sarah Palin, the Tea Baggers are just Republicans who happen to be louder and more in your face about it.
A Quinnipiac University poll released just two weeks ago found that 74 percent are Republicans or independent voters leaning Republican, while 77 percent voted for Sen. John McCain in 2008. (Exit polls showed that McCain won 90% of Republican voters but only 44% of independents.) That's a far cry for the current 8-point Democratic edge in party identification Gallup found for the United States as a whole.
The Quinnipiac findings echo a February CNN survey which similarly demolished the myth of the Tea Bagger-as-independent. As CNN polling director Keating Holland noted:

"87 percent say they would vote for the GOP candidate in their congressional district if there were no third-party candidate endorsed by the Tea Party."

But while there is little mystery about the Tea Baggers political leaning, they themselves remain confused about the issues. As The Hill noted, the supposed small government purists want activist government to battle unemployment while cutting taxes while oxymoronically claiming they want to see the deficit cut:

The group is united around two issues - the economy/jobs and reducing the deficit. They believe that cutting spending is the key to job creation and favor tax cuts as the best way to stimulate the economy. That said 61 percent of Tea Party members believe infrastructure spending creates jobs. Moreover, given the choice Tea Party members favor 63-32 reducing unemployment to 5 percent over balancing the budget.

If that's true, Tea Party members should have loved the stimulus package. Among other things, President Obama as promised delivered tax cuts to over 95% of working households. Sadly, as CBS reported in February, that fact seems to have eluded the Tea Party faithful:

As was documented in detail in "The 5 Signs of Republican and Tea Party Unity," the supposed Tea Party movement is simply a continuation of the failed 2008 Republican presidential campaign by other means. Tea Baggers don't merely vote Republican. A quick look at campaign 2008 videotape shows little difference between the Tea Partiers now and the McCain-Palin mob then. From death panels, Barack Obama's citizenship to his supposed Muslim faith and even warnings that he is the Anti-Christ, Tea Party myths are broadly shared by Republicans (especially in the South). And for their part, Republicans leaders including Michael Steele, Sarah Palin, John Cornyn and Jim Demint have made clear that "We need to stop looking at the tea parties as separate from the Republican Party."
Nevertheless, the Los Angeles Times proclaimed today's Tea Partiers to be just like you and me:

A new Gallup Poll out this morning of 1,033 finds nothing fringe about self-proclaimed Tea Party adherents; they are slightly more likely to be employed, male and definitely more conservative. But otherwise Gallup's Lydia Saad writes, "their age, educational background, employment status, and race -- Tea Partiers are quite representative of the public at large."

Representative, that is, of the Republican Party at large.
(For more on the far from mainstream beliefs and Republican identity of the Tea Partiers, see "The 5 Signs of Republican and Tea Party Unity" and "10 Lessons for Tea Baggers.")

2 comments on “The Myth of the Mainstream Tea Party”