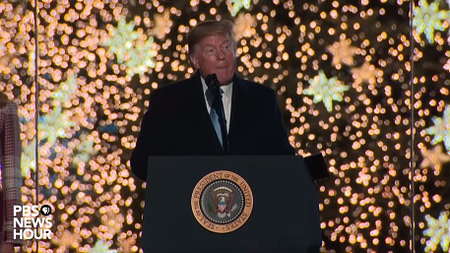 The holiday season is a special time of year for Americans of all faith traditions. The arrival of Hanukkah, Christmas, and New Year's brings good cheer and joy to family, friends, and even perfect strangers. Above all, it is for many a time of reflection on the miracles that define the meaning of human existence in this life and the next.
In keeping with the spirit of the season, the Republican Party has been marking the end of the second decade of the 21st century with some miracles of its own. For these magical events and mysterious developments that defy the laws of science and nature, the GOP's message to Americans is simply this: You're welcome.
The Hanukkah Miracle of Rudy Giuliani. Married to and divorced from three women in rapid, possibly overlapping succession, the president's lawyer may not be the world's greatest Catholic. But in his telling, Rudy "is more of a Jew" than Holocaust survivor and philanthropist George Soros. Refusing to back down on his story, Giuliani is making one day's worth of his anti-Semitism last eight.
Holy See Do You Say. Speaking of the thrice-married, on Dec. 15, former House Speaker and Fox News regular Newt Gingrich proclaimed, "I had to speak out about the vast differences" between the impeachment of Bill Clinton in 1998 and the impeachment of Donald Trump just days ago. When Newt declared, "I should know," he was telling the truth. After all, the third Mrs. Gingrich is now called the United States ambassador to the Vatican. But back in the mid-90s, Callista Bisek was known only as Newt's "frequent breakfast companion." Despite Gingrich's humiliation, Fox News keeps resurrecting him.
The Pool Boy Who Walked on Water. In the wake of Christianity Today's thundering editorial calling for the removal of President Trump, Liberty University President Jerry Falwell Jr. rose to the defense of the man who spoke so passionately at his school about the two Corinthians who walked into a bar. Far from turning the other cheek, Falwell proclaimed, "I told the crowd at the Palm Beach GOP Christmas/Hanukkah party tonight that I predict the 2020 election will be Hiroshima and Nagasaki for the Dems!" But if nuclear evisceration seems out of keeping with the teachings of the Prince of Peace, Falwell would have you remember the words of Matthew 5:5: "Blessed is the pool boy, for he shall inherit my worth."
Continue reading at Daily Kos.