This weekend's third anniversary of the invasion of Iraq brought another shake-up in the Top 10 GOP Sound Bites List.
Catapulting to #4 is the new White House medley, "We're Makin' Progress", performed by George Bush, Dick Cheney, Donald Rumsfeld and General George Casey. Still topping the charts is the hard rocking smash hit, George W. Bush's "Terrorist Surveillance Program." Coming in a close second is Scott McClellan's lyrical magic, "Ongoing Investigation." Another cut from that same broken record, Karl Rove's "Pre-9/11 Mindset," is hanging on to #3 in the rankings.
Dropping off the charts was February's number 8 and long-time favorite, "Gathering Threat." And falling from fourth to eighth is the timeless Pat Robertson-Tony Perkins classic, "Culture of Life."
Here is the complete list of the latest Top 10 GOP Sound Bites: 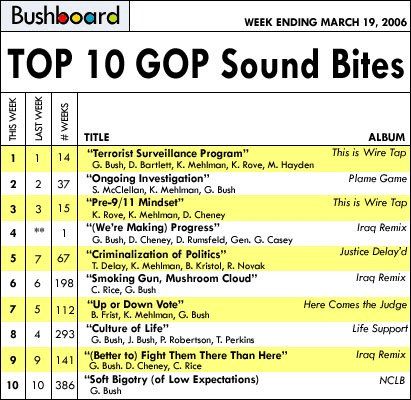