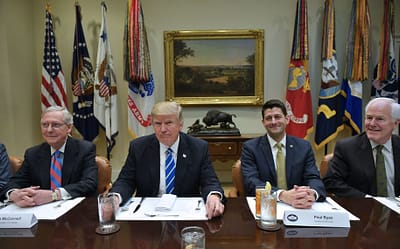 In recent years, "red state socialism" has become the hallmark of American federalism. That is, even as supposed GOP budget hawks loudly (and wrongly) decry "out of control" spending by Uncle Sam, less well-off Republican-controlled states generally benefit from a one-way flow of federal tax dollars made possible by wealthier blue states usually dominated by Democrats. But that is as it should be. After all, Americans everywhere should want Americans anywhere to have the resources for the education, health care, and anti-poverty programs they deserve and may badly need. Patriotism, civic duty, community, and compassion don't end at the state line.
That's especially true in times of war, crisis, and natural disaster. When Americans anywhere are in danger, there is no "red" or "blue," but only Red, White and Blue. With the staggering calamity from Hurricane Harvey still unfolding in Texas and Louisiana, first responders and volunteers, charities and church groups, and millions of people from every state and every faith all reaffirmed that shared American ethos.
But back in Washington, the president and some of his GOP allies on Capitol Hill provided a stark contrast to that spirit of selflessness and unity. Gulf state members of Congress, led by Texas Republicans Sens. John Cornyn and Ted Cruz, called for billions of dollars in federal aid they voted to deny their blue state brethren after Superstorm Sandy in 2013. At the same time, Donald Trump launched his push for a massive tax cut windfall for the wealthy, a giveaway he and GOP leaders hope to pay for in part by punishing taxpayers and breaking budgets in traditionally Democratic states. Meanwhile, in areas as diverse as health care, immigration, and possibly infrastructure, GOP policymakers are seeking blue state payback as a means of retribution--or just out of pure spite.
Continue reading at Daily Kos.