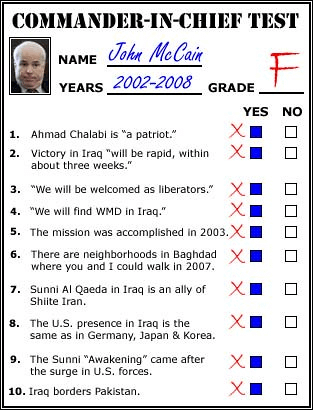 Sadly, when it comes to the war in Iraq, it is the Arizona Republican who failed his own commander-in-chief exam. At almost every turn in the run-up to the invasion and the ensuing American occupation, McCain's judgment was almost always wrong, often disastrously so. From his predictions of a short war, claims U.S. troops would be greeted as liberators and that the U.S. would find weapons of mass destruction to his announcements of mission accomplished, his ongoing confusion over friend and foe in Iraq and so much more, John McCain the would-be wartime president gets failing marks.
That F grade is not, as McCain insists, a "job for the historians." As his past statements show, American voters can reach that conclusion right now.