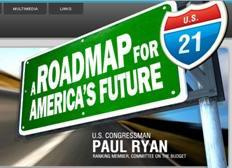 Fresh off her pronouncements on the Fed's "quantitative easing" and federal aid to the states, Sarah Palin this week added the deficit and Medicare to her Potemkin façade of policy expertise. A year after she first endorsed converting Medicare into a voucher program, Palin took to the pages of the Wall Street Journal to endorse Congressman Paul Ryan's "Roadmap for America." Which is more than a little ironic for the propagator of the "death panels" myth. As it turns out, Ryan's plan would inevitably lead to the rationing of the Medicare program on which 46 million American seniors now depend.
In her WSJ op-ed Friday, the half term governor offered her full support for Rep. Ryan (R-WI) scheme to privatize Social Security and Medicare:

Rep. Ryan proposes fundamental reform of Medicare for those under 55 by turning the current benefit into a voucher with which people can purchase their own care.
On Social Security, as with Medicare, the Roadmap honors our commitments to those who are already receiving benefits by guaranteeing all existing rights to people over the age of 55. Those below that age are offered a choice: They can remain in the traditional government-run system or direct a portion of their payroll taxes to personal accounts, owned by them, managed by the Social Security Administration and guaranteed by the federal government.

Hoping to lead the party that tried to block Medicare in the 1960's and gut it in the 1990's, Sarah Palin heartily endorsed Paul Ryan's proposal to cure what ails the health insurance system for millions of American seniors by killing it. In an August Washington Post op-ed ("A Roadmap to Saving Medicare") that mentioned neither the word "voucher" nor "privatization," Congressman Ryan intends to do apply both to address the long-term financial issues facing the system:

Future Medicare beneficiaries would receive a payment to apply to a list of Medicare-certified coverage options. The Medicare payment would grow every year, with additional support for those who have low incomes and higher health costs, and less government support for high-income beneficiaries. The most vulnerable seniors would also receive supplemental Medicaid coverage and continue to be eligible for Medicaid's long-term care benefit.

The only alternative, he insists, "is the European-style death spiral of the welfare state":

Kick the can down the road as our debt explodes. Under an ever-expansive, all-consuming central government, costs will be contained with Washington's heavy hand imposing price controls, slashing benefits and arbitrarily rationing seniors' care.

Of course, Paul Ryan is the only one proposing rationing Medicare. And, as it turns out, he has admitted as much.
When Ryan unveiled his Roadmap back in February, as Ezra Klein, Matthew Yglesias and TPM all noted, privatization of Medicare was the centerpiece. But because the value of Ryan's vouchers fails to keep up with the out-of-control rise in premiums in the private health insurance market, America's elderly would be forced to pay more out of pocket or accept less coverage. The Washington Post's Klein described the inexorable Republican rationing of Medicare which would then ensue:

Ryan acknowledged as much. Sadly for the Republican brain trust, he failed to follow the script that only Democratic reforms lead to "health care denied, delayed and rationed."

Of course, Ryan left out the real culprit - the private insurance market. But with 50 million uninsured, another 25 million underinsured, one in five American postponing needed care and medical costs driving over 60% of personal bankruptcies, Congressman Ryan is surely right that "rationing happens today."
But the Republican plan to "slash and privatize" hardly ends there. Despite insistence by the Republican leadership that the party is not officially advocating it, the Ryan alternative budget follows Rep. Jeb Hensarling's announced desire to privatize Medicare. As TPM documented:

Rep. Paul Ryan, (R-WI) the ranking Republican on the budget committee, recently detailed the Republican plan for Social Security that preserves the existing program for those 55 or older. For younger people the plan "offers the option of investing over one-third of their current Social Security taxes into personal retirement accounts, similar to the Thrift Savings Plan available to federal employees."

If that sounds vaguely familiar, it should. After all, George W. Bush's disastrous drive to privatize Social Security helped undermine his presidency. Now, in the wake of a Wall Street meltdown that evaporated the retirement savings for countless thousands of Americans, the Republican wunderkind Ryan is calling for an encore.
Which, in the run-up to the midterm elections in November, made the Republican leadership queasy. Because while most no doubt agree in principle, they were terrified of saying so on the record.
In February, House Minority Leader John Boehner distanced himself from Ryan's Roadmap, saying, "it's his." In July, Boehner grumbled, "There are parts of it that are well done," adding, "Other parts I have some doubts about, in terms of how good the policy is." And with good reason. With its draconian spending cuts, Medicare rationing, tax cuts for the rich and Social Security privatization, a GOP platform based on Ryan's Roadmap would about as popular as the Ebola virus. As the Washington Post put it this summer:

Many Republican colleagues, who, even as they praise Ryan for his doggedness, privately consider the Roadmap a path to electoral disaster...
The discomfort some Republicans feel for Ryan's proposals goes beyond November. If Republicans were to take control of Congress next year, Ryan will rise to chairman of the Budget Committee. He could use the position to hold colleagues accountable for runaway budget deficits and make it more difficult for fellow Republicans -- and Democrats -- to stuff bills with expensive projects that add to the problem.

For his part, Ryan has acknowledged the GOP's allergic reaction to his Roadmap. "While I am proud to have 13 House Republicans co-sponsor the legislation, and have been overwhelmed by the support outside the Beltway," he claimed, "my plan is not the Republican Party's platform and was never intended to be."
But now it's Sarah Palin's, too.
Of course, as Paul Krugman and Five Thirty Eight among others documented, Paul Ryan's Roadmap does not slow the growth of the national debt:

The nonpartisan Tax Policy Center has, however, stepped into the breach. Its numbers indicate that the Ryan plan would reduce revenue by almost $4 trillion over the next decade. If you add these revenue losses to the numbers The Post cites, you get a much larger deficit in 2020, roughly $1.3 trillion.

That didn't stop Sarah Palin from claiming the reverse. And in her Wall Street Journal piece, Palin also repeated her "death panels" fraud that Politifact deemed the "Lie of the Year" in 2009:

It [Obamacare] also implicitly endorses the use of "death panel"-like rationing by way of the new Independent Payments Advisory Board--making bureaucrats, not medical professionals, the ultimate arbiters of what types of treatment will (and especially will not) be reimbursed under Medicare.

President Obama's Affordable Care Act does no such thing. But by leaving America's elderly at the whim of private insurers, Paul Ryan's plan - now endorsed by Sarah Palin - surely does.