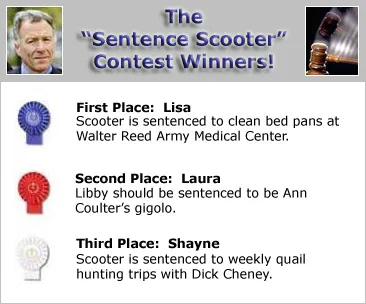 Perrspectives is pleased to announce the winners of the "Sentence Scooter Contest."
Two weeks ago, we asked readers to provide a fitting sentence for Mr. Libby, Dick Cheney's former chief of staff convicted on four counts of perjury and obstruction of justice in the outing of CIA operative Valerie Plame. And what could be more fitting than to mete out metaphorical punishment to one of the architects of the Iraq war during this week, the fourth anniversary of the invasion.
Our first place winner and recipient of a $100 Amazon gift certificate is Lisa, with her simple suggestion that Scooter be assigned to clean bed bans at Walter Reed Army Medical Center. Coming in second and claiming a $50 certificate was Laura with her even more distasteful punishment of sentencing Libby to be Ann Coulter's gigolo. In third was Shayne, with his suggestion that Scooter be sentenced to weekly quail hunting outings with his old boss Dick Cheney.
Among the entries, which ran the gamut of taste and decency, were also several honorable mentions. Briseadh na Faire's haunting March 10 poem "Poetic Justice" details in R-rated rhyme the penal system's just retribution for Libby. Other righteous responses include Scooter's secret rendition to Abu Ghraib for some human pyramid practice (Doug), Libby having his head shaved by Britney Spears (from Back in the Cheney Gang), and the Scooter's assignment (by Scooter Scooper) open the Brewster Jennings office in Tehran.
Visit the "Sentence Scooter" contest page to see all the entries.
To see past contest results, including "Name That Bush Scandal," "Karl Rove Whack-a-Mole," and "What Does GOP Stand For," visit the Perrspectives contest archives.