When George Met Jack at the White House

When it comes to social events at the White House, the only thing worse for a President than self-serving gate crashers is when the miscreant has an invitation. And so while conservatives gloat over the Secret Service failure that allowed climbers Michaele and Tareq Salahi to crash the state dinner for the Indian prime minister, it's worth remembering that when Republican uber lobbyist and convicted felon Jack Abramoff roamed the Bush White House, he was an honored guest. 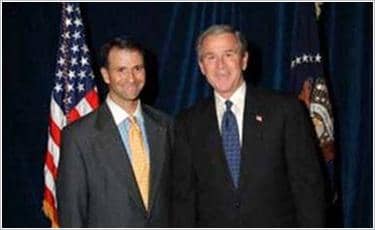 For his part, President Obama has ordered a review into how the Virginia couple and would-be reality TV stars made their way into this week's function. For their part, even conservative bloggers fretted about the disturbing security lapse that allowed the Salahis to come "face to face with The One himself." But as another predictably suggested, it's all Obama's fault even when it isn't:

"It unfortunately also embarrasses the Secret Service, Obama, and pretty much the entire White House. It was Obama's first state dinner, and how will people remember it? They'll remember that two famewhore socialites snuck in and that his security allowed it to happen. This, for once, is not Obama's fault, but he's the one embarrassed by it inevitably. I wonder how long it will take him to blame this on President Bush, though."

Of course, you can't blame George W. Bush for letting the Salahis slither their way into a White House social function. But letting Jack Abramoff through the door is another matter altogether.
As you'll recall, in September 2008, Abramoff was sentenced to four years in prison for a lobbying scandal whose tentacles spread throughout Capital Hill and the Bush administration. And as the Washington Post recounted, Abramoff would have a lot of company in jail from among the ranks of his Republican colleagues:

More than a dozen people, including an Ohio congressman and a deputy secretary of the interior, have been convicted in the Abramoff lobbying scandal, and Justice Department officials said the investigation is continuing. Still under scrutiny are former House majority leader Tom DeLay (R-Tex.) and retiring Rep. John T. Doolittle (R-Calif.).

Which is why the Bush White House was desperate to erase any evidence of the association between Abramoff, the President and his highest level staffers. On January 26th, 2006, President Bush denied any relationship with Abramoff, a "Pioneer" who raised over $100,000 for his reelection campaign:

"You know, I, frankly, don't even remember having my picture taken with the guy. I don't know him."

As it turned out, of course, George W. Bush knew Jack Abramoff and had his picture taken with the guy several times.
After the administration and Secret Service stonewalled repeated requests to release the complete visitor logs detailing Abramoff's arrivals, the House Government Reform Committee in September 2006 issued a damning report on his unimpeded access to the Bush White House. The bipartisan, 93-page analysis issued by ranking Republican Tom Davis (R-VA) and Democrat Henry Waxman (D-CA) concluded current reporting requirements "failed to protect public officials from the ethical undertow generated by Abramoff's claims of access to executive branch deliberations, particularly at the White House."
That report documented what had been a revolving door between Abramoff's lobbying operation and the Bush White House. As the Washington Post reported:

Disgraced lobbyist Jack Abramoff and his colleagues billed their clients for more than 400 contacts with White House officials between 2001 and 2004, to a report released yesterday by the House Government Reform Committee...
The report, based on 14,000 e-mails and other documents, conveys many assertions by Abramoff and his team about their efforts to lobby White House officials on matters affecting their Indian tribal clients.
Abramoff's team offered officials tickets to 19 sporting events and concerts, the report states, but "in many instances the documents do not indicate whether the White House officials requested or attended the events." One who did accept tickets, the report said, was Susan Ralston, executive assistant to White House presidential adviser Karl Rove.

Among those Jack Abramoff was glad-handing was President George W. Bush. 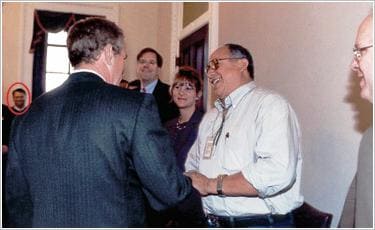 As Time explained in January 2006, the denials from Bush and press secretary Scott McClellan ("The President does not know him, nor does the President recall ever meeting him.") were simply laughable in the face of numerous photos (later scrubbed) from the presidential receptions Abramoff attended:

In one shot that TIME saw, Bush appears with Abramoff, several unidentified people and Raul Garza Sr., a Texan Abramoff represented who was then chairman of the Kickapoo Indians, which owned a casino in southern Texas. Garza, who is wearing jeans and a bolo tie in the picture, told TIME that Bush greeted him as "Jefe," or "chief" in Spanish. Another photo shows Bush shaking hands with Abramoff in front of a window and a blue drape. The shot bears Bush's signature, perhaps made by a machine. Three other photos are of Bush, Abramoff and, in each view, one of the lobbyist's sons (three of his five children are boys). A sixth picture shows several Abramoff children with Bush and House Speaker Dennis Hastert, who is now pushing to tighten lobbying laws after declining to do so last year when the scandal was in its early stages.

All Americans should be concerned for their President's safety when gate crashers can seemingly maneuver their way into a secure, invitation-only event at the White House. But the national embarrassment Americans feel about when Obama met Salahi should pale in comparison to when George met Jack.

One comment on “When George Met Jack at the White House”